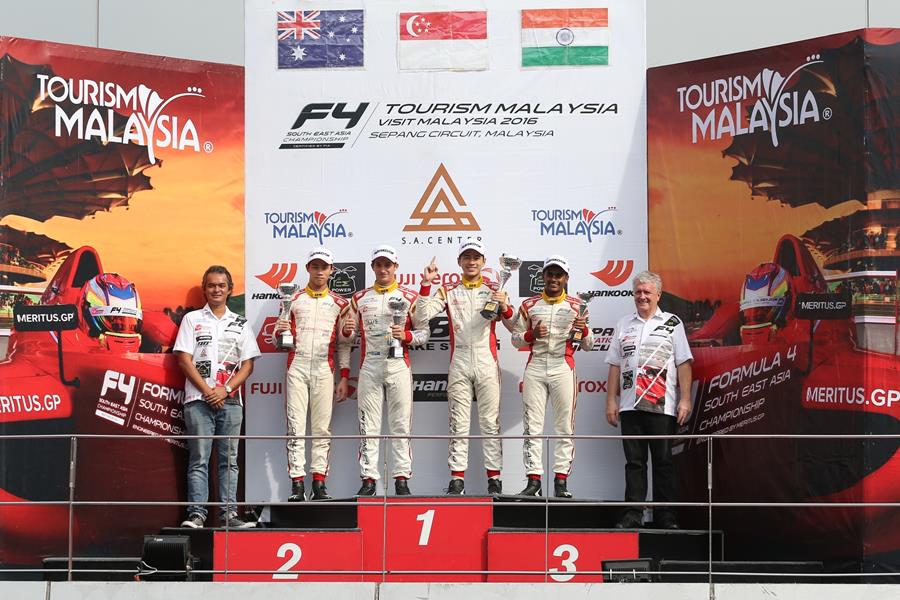 The final day of the fourth event in the inaugural season of the Formula 4 South East Asia (F4/SEA) Championship – certified by FIA witnessed the drivers compete in the sixth and final scheduled race on Saturday morning.

The day’s honours belonged to Singapore’s Danial Frost (SIN, Car #66) who claimed an impressive win in the morning’s final Race 6. The win came at the expense of Australian Jordan Love (AUS, Car #79) who had set out to claim another victory for a clean sweep. The Aussie ace instead had to settle for second, ahead of India’s Akash Gowda (IND, Car #33), who just edged out Kiwi Faine Kahia (NZL, Car #55), who finished fourth. Meanwhile, a fifth place finish by Indonesian rookie Presley Martono (INA, Car #32) was enough for the youngster to also take the rookie win for the race. Local hopeful Isyraf Danish (MAS, Car #19) finished sixth as the best-placed Malaysian finisher, ahead of India’s Mohamed Nalwalla (IND, Car #46).

With five race wins and one second place finish, Love also walked away from the weekend with the Fuji Xerox Star Driver award for the F4/SEA Event 4. In second place overall was Frost with Martono in third overall for the weekend.

Despite the overnight torrential downpour, the sixth and final race of the weekend was declared dry enough by race officials for the drivers to run on slick tyres. With the grid positions determined from the finishing positions from the previous race, there would be the added twist of the top half of the grid reversed. As such, starting from pole was Singapore’s Frost with Gowda accompanying him on the front row from P2. The second row of the grid saw Martono and Kahia lined up in P3 and P4, respectively, while Love had it all to do from P5 with Isyraf Danish in P6.

A strong start by Frost saw the youngster hold on to his lead from Gowda into the first corner. An even better start by Love from fifth on the grid saw the Aussie ace move up into third position by the end of the opening lap. >From that point it was a three-way fight for the lead between Frost, Gowda and Love. That quickly changed when Love took second away from Gowda, as the young Aussie began hunting down Frost. Though the Indian did not relent in his pursuit to regain the position, he too would become embroiled in a scrap of his own to defend third place from a charging Kahia.

At the front, an enthralling duel was on the cards when Love began to close in on Frost. Despite several attempts to overtake Frost, including a hairy moment in the run on the main straight, the Singaporean was able to hold on to his nerve to defend his lead of the race. That moment would also temporarily bring Gowda back into the fight, but it did not last for long as the two ahead of him began opening up a gap to him. That left Gowda with the task of maintaining his track position from Kahia.

With Martono enjoying a quiet race in fifth, behind him tensions were also high with another interesting battle in mid-field between Oman’s Khalid Al-Wahaibi (OMN, Car #8), Malaysia’s Isyraf Danish and India’s Mohamed Nalwalla (IND, Car #46).

Back at the front, despite his best efforts, Love was not able to make a move on Frost who drove a superb race to claim the race victory, denying Love a clean sweep from the weekend. Finishing third was Gowda, ahead of Kahia and Martono in fourth and fifth, respectively. In the battle for sixth, it was the Malaysian Isyraf Danish who prevailed over Nalwalla.

Danial Frost (SIN, Car #66), Winner Race 6 / 2nd Overall – Star Driver Award “This was a really good race as I had a decent start and managed to pull away from Akash (Gowda). That gave me the time to think and focus on not making any mistakes or take any unnecessary risks. After a while, Jordan (Love) managed to catch up to me, so the strategy was to stay concentrated and not make any mistakes.

I am happy with this result. Overall, I learned a lot this weekend, which was definitely better than Sentul! For sure the highlight has to be winning the final race, which is a huge boost of confidence for my preparations for the Buriram (Thailand) next month.”

Jordan Love (AUS, Car #79), P2 Race 6 / Winner Star Driver Award “I had a really mega start, moving up to P3 into Turn 1 on the opening lap. I managed to catch Akash (Gowda) and found myself in a position to push for P2. After that I made a few mistakes and could not make any move stick.

“Overall to get five wins from the six races, I am really happy, as this is a good way to end 2016 ahead of the Christmas holiday! I would like to thank all my sponsors TFS, 7 West Media, GCS, Barbagallo Motor Group and everyone who has supported me!”

Akash Gowda (IND, Car #33) P3 Race 6 I started from P2 and had a decent start behind Danial (Frost). I tried to catch up to him especially in the first few laps as the I was faster. But the track was still wet off the racing line and I could not make a clean move and made a few mistakes. That allowed Jordan (Love) to get close to me and he managed to pass me. When Danial and Jordan started battling it out, I did get the chance to close up but could not keep up. So I decided to instead focus on keeping my pace consistent and bring the car home.”

Presley Martono (INA, Car #32) Star Driver Award – 3rd Overall Star
Driver Award “Though it is not the way I would have liked to end the weekend, I am still very happy to come home in third place overall for the weekend. It was also the first time this season that I managed to finish all six races without any drama. My primary focus now is to come back stronger in Thailand.”

Peter Thompson, Chairman, Triple A: “It has definitely been another intense bumper-packed weekend of racing here at Sepang. Congratulations to Jordan Love on an amazing weekend with five race wins from the six races, which is in itself a remarkable achievement. To be able to come back to our ‘home’ race is always nice, and it lived up to its promise of another exciting event. As we look ahead to the penultimate event next month at the Chang International Circuit in Buriram, Thailand, we are really excited about bringing the F4/SEA to another important market, particularly in developing and sustaining a truly Asian motorsport eco-system.”

Firhat Mokhzani, Managing Director, Triple A: “This was another excellent weekend of racing here at Sepang. We had our fair share of excitement with a lot of close-fought battles. The conditions were also great with the dry weather for all six races, which was great compared to the rain-soaked races we had in Sentul and Clark. Congratulations to Jordan Love who was simply spectacular winning five out of the six races contested here this weekend, as well as to Danial Frost who demonstrated great race craft to win the sixth race. As we conclude the weekend, there is a lot to look forward to at the next event at the Chang International Circuit in Buriram, Thailand next month.”

The penultimate event in the inaugural season will take place at the Chang
International Circuit in Buriram, Thailand from 6 to 8 January 2017.

TweetJust 37 days remaining to the start of Dakar Rally 2023 and one of the biggest team Tatra Buggyra ZM Racing introduced itself to the fans. As location, they chose the in front of monumental... END_OF_DOCUMENT_TOKEN_TO_BE_REPLACED