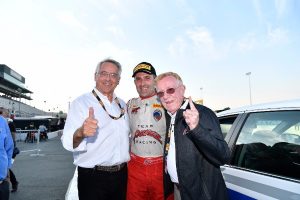 Starting from pole, which James earned today with a qualifying time of 1:39.951, James kept the No. 50 Avezzano GT out front in the early going. On lap three he laid down the race’s quickest lap, posting a time of 1:42.222 and earning the Motul Pole Award and pole position for tomorrow’s Round 18 race. Despite keeping the lead throughout the race, James did find needing to drive a smart race to fend off a late-race charge by Martin Barkey in the No. 80 Mantella Autosport KTM Xbow GT4.

Counting today’s victory, James has nine podiums in the last 11 PWC GT4/GTS Championship races and six overall victories. The previous five victories are two back-to-back wins at Road America, and one each at Mid-Ohio, Utah Motorsports Campus, and the Circuit of the Americas.

TweetJust 37 days remaining to the start of Dakar Rally 2023 and one of the biggest team Tatra Buggyra ZM Racing introduced itself to the fans. As location, they chose the in front of monumental... END_OF_DOCUMENT_TOKEN_TO_BE_REPLACED