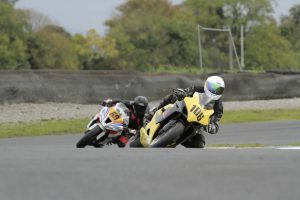 After a ten-year sabbatical from motorbike racing Michael Gillian secured some silver wear and finished up third following a tough yet fruitful season in the Masters Superbike Cup Championship. The Sheffield born, Claremorris, County Mayo resident left Mondello Park a little disappointed following the final rounds of the series but overall was pleased in getting up to speed on the circuits in his 170bhp Suzuki GXSR-1000 K6. Thoughts for next season may see Michael change from enclosed tracks to open road racing and the acquisition of a Suzuki SV 650 Supertwin bike. A real challenge ahead maybe, but the mechanical engineer is up to the task.

The climax to the Masters Superbike Cup Championship, where three racers including Michael, were in contention for the title at the famous Kildare circuit did not go according to plan for the Gillan Racing team leader (@GillanRacing). “The start of the Mondello Masters weekend didn’t go to well as in the first qualifying session the front tyre went flat and I had a high-speed crash. Luckily, I was not hurt but did extensive damage to the bike. Thankfully we managed to get the bike fixed thanks to great help from Paddy Foley and Barry McHale,” explained a downhearted Michael, although grateful of the camaraderie that exists among the bike racing fraternity.

“In Race 1, I managed to get up to third place but fell back to fifth, then I tried to catch my nearest series competitor Ray O’Neill but couldn’t pass him, and as a result fell back to four points behind him in the championship table.”

More hardship was to follow in Race 2, as Michael took the waving checkered flag in 9th place due to an issue with the bike after the crash in qualifying. “In Race 3, I had the bike sorted and got up to third place until the final lap to when James Rowe passed me, I tried to overtake him at the final corner at Dunlop but just missed out.”

Alas, it was too little, too late to gain enough points to come second in the Championship but was a good battle none the less.

“In finishing third in the Masters Superbike Cup Championship, I would like to congratulate series winner Andrew Murphy and to Ray O’Neill who came second, for the great battles we enjoyed during the season. I wish to thank Lucy for supporting me all the way and being so patient, to Mark and also my Mum and Dad. Also, I’m grateful to Alan Neary, Kenneth Gormley, Kevin Leonard, Deborah Fox, Adrian Kenny and Ollie Agnew for their help throughout the year. To all my friends I appreciate their fundraising efforts and donations,” added Michael.

“Special thanks to the local press and radio for their coverage of my season and to irishmotorsportsnews.com, fleet.ie (Fleet Transport) and Murphy Sandblasting Services (Ballina) and Duffy Tyres (Mayo) for their sponsorship for the 2017 season. I look forward to be back racing again next year, in some fashion or other!”

Tweet The Sardinian double-header promised us double the action and double the excitement. It delivered, showcasing some of the best wheel-to-wheel duels in Extreme E to date. The narrow and... END_OF_DOCUMENT_TOKEN_TO_BE_REPLACED