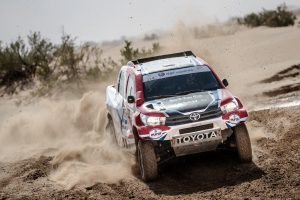 Renowned international football manager André Villas-Boas has switched allegiance to take part in his passion of cross-country rallying and will tackle January’s Dakar Rally in an Overdrive Racing-prepared Toyota Hilux.

The 40-year-old former FC Porto, Chelsea, Tottenham Hotspur and Zenit St. Petersburg manager has teamed up with fellow Portuguese Ruben Faria, himself a former cross-country rider with KTM working alongside five-time Dakar winner Cyril Despres. Faria will act as Villas-Boas’s co-driver on the gruelling event, which starts in Lima on January 5th and finishes in Córdoba on January 20th.

The Portuguese has a passion for motorcycles and previously competed in the Portuguese off-road series, but global football commitments meant he had no time to continue his participation and follow in the footsteps of his uncle Pedro Villas-Boas, who tackled the Dakar Rally in 1982.

Villas-Boas wants to take part in the Dakar on two wheels, but was advised by Alex Doringer, a friend and manager of the KTM factory team, to take part in a car on four-wheels in the first instance. “He told me I needed a year of preparation and advised me to ride in the car, so I got in touch with the Overdrive Team and here I am,” said Villas-Boas.

Overdrive Racing’s CEO Jean-Marc Fortin said: “We are delighted to welcome André Villas-Boas and Ruben to the team for the Dakar. He is well known the world over in football circles and I am sure he is looking forward to the challenge of tackling his first Dakar.”

Villas-Boas led FC Porto to Europa League and Portuguese league and cup success in 2011 and managed Zenit St. Petersburg to further silverware in Russia before heading off to China to take charge of Shanghai SIPG last November. He also worked alongside José Mourinho at Porto, Chelsea and Inter Milan for short periods

TweetTOYOTA GAZOO Racing’s Nasser Al-Attiyah and co-driver Mathieu Baumel will be taking on the 2022 Rally of Morocco, as part of the 2022 World Rally-Raid Championship (W2RC).  The race will take... END_OF_DOCUMENT_TOKEN_TO_BE_REPLACED