The Dakar 2018 will kick off on January 6th in Lima with the start podium for the 1st stage and will cover a total of almost 9,000 km divided into 14 stages, crossing Peru, Bolivia and Argentina to finish in Córdoba

The Africa Eco Race will officially begin on December 31st in Monaco, with the first stage starting in Nador on January 2nd to reach the finish line in Dakar after 12 stages – 5 in Morocco, 6 in Mauritania and 1 in Senegal – and 6,500 km

Two rally raids, two continents, one team competing for success in the most demanding routes in the world. This year, Team PETRONAS De Rooy IVECO will tackle extreme terrains, competing in two different competitions on board four IVECO Powerstar: Artur Ardavichus and Ton Van Genugten in the Dakar 2018 and Team Leader Gerard De Rooy and Wuf Van Ginkel in the Africa Eco Race 2018.
For the eighth consecutive year, IVECO will be the official supplier of Team PETRONAS De Rooy IVECO and provide them with vehicles, engines and spare parts. The IVECO Powerstar vehicles are equipped with IVECO Cursor 13 engines with up to 1000 hp of power specially engineered by FPT Industrial – CNH Industrial’s powertrain brand.

THE DAKAR 2018
For its 40th edition – and the 10th in South America – the Dakar 2018 will set high standards from the start: competitors will kick off in Lima and immediately face the harsh Peruvian sandscapes. The Dakar will then leave the desert to take on the mountains of the Bolivian Altiplano with a faster track, and the need to adjust to an altitude of 2,500 meters. In Argentina the rally raid will reach the most difficult part, with the Super Fiambalá stage.

Kazakh Artur Ardavichus will compete with co-pilot Serge Bruynkens and mechanic Michel Huisman on board his #508 IVECO Powerstar. The newest driver of Team PETRONAS De Rooy IVECO, he made his debut in the Silk Way Rally 2017, conquering 4th place. Dutch pilot Ton Van Genugten, co-pilot Peter Willemsen and mechanic Bernard der Kinderen will also compete in the Dakar rally for the PETRONAS De Rooy IVECO Team on their #509 IVECO Powerstar.

THE AFRICA ECO RACE 2018
For its 10th edition, the Africa Eco Race will welcome a record number of competitors. More than a hundred vehicles, nearly 200 riders, drivers and co-drivers, will start from Monaco on December 31st. Gerard De Rooy, at the wheel of his IVECO Powerstar, will be following on the footsteps of his father Jan, who won the rally’s first edition, and is the favourite of the 15 truck participants.
From December 31st – day of the Official start and drive from Monaco to the ferry boarding in Sete – to January 14th, competitors will cross Morocco, Mauritania and Senegal before reaching the legendary Lac Rose, in Dakar, for a spectacular closing stage. The pilots will cover 6,500 km, of which more than half will be special stages along the tracks of Morocco and in the Sahara Desert in Mauritania, in an adventure that will test their endurance and navigation skills to the limit.
Gerard De Rooy, Team leader, will compete on his #400 IVECO Powerstar with his experienced co-pilot Moi Torrallardona and the technical support of mechanic Darek Rodewald. Wuf Van Ginkel, with co-pilot Erik Kofman and mechanic Bert van Donkelaar will compete in the second IVECO Powerstar (#403). 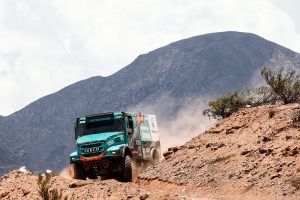 TEAM PETRONAS DE ROOY IVECO CO-SPONSORS
This year, the Team’s sponsors include Italian loader crane manufacturer Fassi Gru, which is making its debut in the two rally raids. The market leader among Italian producers, Fassi Gru exports, distributes and supports its wide range of cranes across the world.
FPT Industrial, a brand of CNH Industrial that designs and manufactures on-road, off-road, marine and power generation engines as well as axles and transmissions, will be technical sponsor of team PETRONAS De Rooy IVECO.
Sparco designs, produces and sells automotive and motorcycle sports safety suits and footwear worldwide. The company will provide motorsports racing apparel and accessories to the Team’s pilots.
PETRONAS Lubricants International, as title sponsor and technical partner for the PETRONAS De Rooy IVECO Team, will provide lubricants and functional fluids for rally and support vehicles. The team will use PETRONAS Urania premium engine oil, formulated with the advanced additive technology, specifically designed for total engine protection, enhanced efficiency and performance.