Conor Daly is back in Indy 500 once again

Just like his father (Derek Daly) before him, Conor Daly, the 26-year-old Noblesville, Indiana, driver – with Strong irish roots, is teaming with Dale Coyne, Thom Burns and the United States Air Force to race in the 102nd Indianapolis 500 presented by PennGrade Motor Oil on May 27.

Just like in the Conor’s four previous Indy 500 rides, his car will have the traditional patriotic colors – the No. 17 Honda has a Thunderbird fighter jet paint scheme. It’s the first time the Air Force has been a primary sponsor for this race after years of NASCAR involvement primarily with Richard Petty Motorsports. 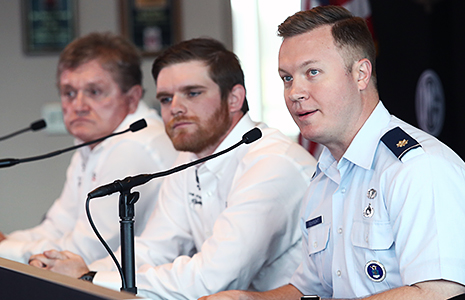 “Everyone knows me as probably the most American dude out there,” Daly said during the news conference at Indianapolis Motor Speedway. “I think I’m now five-for-five on red, white and blue cars when I’m competing in the Indy 500. But this one has to be the best, though.

“When you talk about partnerships and deals that you’re trying to do for the biggest race in the world, to have the opportunity to represent the U.S. Air Force, that’s sort of at the top of the list. That’s something that’s a great honor certainly for a young American like me. The car looks incredible. The Thunderbird livery is pretty striking.”

Daly is reunited with Coyne, for whom he enjoyed his best Verizon IndyCar Series results driving full time in 2016, when he was a career-best second at the Chevrolet Detroit Grand Prix and fourth at Watkins Glen. Daly has 10 career top-10 finishes in 27 starts. Four of those top-10 finishes were with AJ Foyt Racing last season, but he didn’t have a full-time ride this year.

Although his IMS history has been unkind – he’s finished 22nd, 33rd, 29th and 30th in the Indy 500 – Daly expressed optimism about delivering a solid result this time.

“We have a lot to prove at Indy, obviously,” said Daly, the son of former Indy car and Formula 1 driver from Dublin, Derek Daly. “Everywhere else, I’ve had decent results. But here, it’s been really tough. … I know what we’ve got to work with and I think it’s going to be really good.

“For me, it’s just about getting to the next level and figuring out how to improve on what I’ve learned already because I’ve learned a lot. If you just look at Indy, I’ve had a lot of stuff happen here. I’ve burned to the ground (with an engine failure) before the race even started (in 2015). I feel like this place owes me.”

Coyne will also field cars for four-time Indy car champion Sebastien Bourdais and rookie Pietro Fittipaldi in the Indy 500, with a fourth entry expected to be announced soon.

“Conor has done a great job for us in the past and we hope to continue that this year at IMS,” Coyne said in a news release. “We also very much look forward to working with Thom Burns Racing and we’re extremely pleased and honored to be partnered and representing the United States Air Force.”

“We evaluate the opportunities that exist out there to get the Air Force recruiting message out there to inspire, engage and recruit the next generation of great airmen,” McKnight said. “This seemed like a wonderful opportunity, a perfect pairing, to put together ‘The Greatest Spectacle in Racing,’ the Indy 500 and the U.S. Air Force, and the shape of the car, everything just lends itself perfectly to the Thunderbird paint scheme in the shape of a fighter jet.

“We thought it was a wonderful match to reach out to our target audience and make those connections and be able to communicate the Air Force opportunities and benefits and careers that exist out there on this wonderful, large platform.”

Daly is hoping for one more thing from the Air Force partnership – a ride in a Thunderbird fighter jet.

“I asked them that last night, actually,” he said. “Are there any planes available for me to be involved in? I think that should be a requirement. I’d love to.”

Tweet FIM Bajas World Cup, round 2 QMMF ANNOUNCES SECOND ROUNDS OF FIA AND FIM BAJA CUPS  LUSAIL (Qatar): The 2023 Qatar International Baja will be a counting round of both the FIA World and Middle... END_OF_DOCUMENT_TOKEN_TO_BE_REPLACED