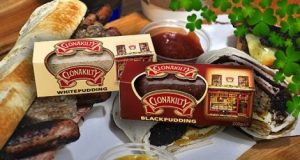 Clonakilty Blackpudding had been title sponsor for the past four years and had always intimated they would like to keep an association with the ITRC after the deal for the title sponsorship had ended. Company owners, Collette and Ed Twomey have been ever present and supporters over the past four years and continuing as an associate sponsor for 2018 proves their commitment to the Irish Tarmac Rally Championship: “We are delighted to continue our proud association with the Irish Tarmac Rally Championship. We look forward to seeing you all for the opening round in Clonakilty this St Patrick’s weekend for the West Cork Rally,” said Colette Twomey.

Michelin has been associated with the Irish Tarmac Rally Championship and indeed all Irish rally championships and its competitors for many years: “It is great to be able to support the Irish Tarmac Rally Championship which includes some of Irelands most iconic rallies.  Michelin work hard to provide the most cost-effective tyres. For these long international events Michelin tyres offer long lasting consistency with rally winning pace,” commented Tim Hoare, UK & Ireland Marketing Manager.

The Irish Tarmac Championship celebates its 40th season this year and the forthcoming Quality Hotel West Cork Rally is the opening round of the 2018 series.

Commenting on the new season ahead, Paddy Flanagan, Championship Manager said: “Interest and registrations are already very strong, and we look forward to a successful and competitive 2018 Championship.  TV coverage has been secured and the Championship will be broadcast in Ireland, the UK, most other European countries, Australia, New Zealand, and North America.”

Tweet For the fourth time, the Instaforex Loprais Team will enter its Praga V4S DKR. A fully refurbished truck, with a different colour scheme, but without any major technical changes. The main... END_OF_DOCUMENT_TOKEN_TO_BE_REPLACED