Ireland’s most successful rallycross driver of all time, double FIA European Rallycross Champion Derek Tohill, will get his 2018 Euro RX season underway this weekend at the Circuit de Barcelona-Catalunya in Spain (April 14 – 15).

Ten years on from making his European Rallycross debut in a Division Two Honda Civic, Tohill and the PFCRX squad embark on a third year racing in the headline Supercar category this season with a 600 horsepower, four-wheel drive OlsbergsMSE-built Ford Fiesta that accelerates from 0-60 mph in less than two seconds.

The Irish team stepped up a level last season in the highly-competitive top tier of Euro RX and challenged for a place in the final at every event throughout Europe, only just missing out on a maiden Euro RX Supercar podium.

Following a winter of developments to the Fiesta undertaken by preparation experts C-Sport, PFCRX is hoping to climb even further up the rankings this term and contested its maiden event of the year last weekend at Mondello Park, as a pre-Euro RX season shakedown, which resulted in victory.

The competition will be fierce in Euro RX Supercar in 2018, with a 30-car strong line-up compromising of national, European and World champions and event winners, some campaigning works-built cars. Following round one in Spain this weekend, the series heads to Belgium (Mettet), Sweden (Holjes), France (Loheac) and Latvia (Riga).

The French and Swedish rounds, the two biggest rallycross events in the world, hold especially fond memories for Tohill and the PFCRX squad. On the way to a pair of FIA European Rallycross Championship TouringCar titles (2010 and 2013), hard fought victories was achieved at both venues.

Keep up to date with the event this weekend via the live timing facility on the FIA World Rallycross Championship website, live television coverage of the Euro RX final on Sunday afternoon and via Derek Tohill’s Social Media accounts (links below)

“I’ve been asked several times what we’ve done over the winter, but being honest it’s more a case of what we haven’t done. We have looked at every area and the boys at C-Sport have worked very hard on the car which has had a full rebuild along with continued development.

We have a revised engine from Mountune and we go to Barcelona this weekend hoping for an improvement on our result there from last season, where we finished fifth. Of course we cannot underestimate the level of the competition, there is a huge amount of quality in the championship and one poor qualifying time in any event can leave you out of the running, but that’s what makes it such an appealing challenge.

The whole team is really at one with Molly the Fiesta now, we’ve known her for a few years and progressed year-on-year. We’re all working as hard as we can to continue that trend this season. We had a good shakedown at Mondello last week, it helped us iron some things out before the truck left for Spain. It’s always nice to drive at home, and to support Irish rallycross. But, we can’t wait to get started with our main focus this weekend. 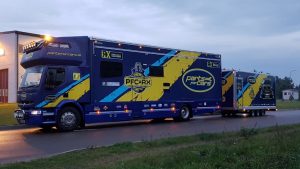