An exciting weekend full of challenge for IVECO: Magirus wins the first Grand Prix of the European Truck Racing Championship 2018
Jochen Hahn from Team Hahn and Steffi Halm, on her debut with Team Schwabentruck, conquer the first and second position of the Drivers’ podium in the Championship’s first round
The next round will take place in Hungary at the Hungaroring on June 16th and 17th
Turin, 28 May 2018

The IVECO Magirus’ Hahn Racing and Team Schwabentruck – triumphed in the Grand Prix of Italy of the 2018 edition of the European Truck Racing Championship in Misano (RN), closing the weekend with the top two podium placings. The Team won the Grand Prix collecting 88 points, with Jochen Hahn conquering the first place in the final standing (50 points) closely followed by Steffi Halm in second position (34 points).

The Italian Truck Race took place over the two days of the weekend with four competitions, two on Saturday and two on Sunday.

The first of the four competitions of the Grand Prix in Misano saw Jochen Hahn as the first pole-sitter of 2018, which was converted into the first FIA European Truck Racing Championship win of the season. High drama due to an accident and a competing truck catching fire, which resulted in having to restart the race, did nothing to slow down the four-time FIA ETRC champion who delighted IVECO’s home fans with a hard-fought win. Hahn commented: “It is a good start to the year. It was not easy as Antonio [Albacete] put big pressure on and we all had to do two starts as well, so it was tricky. Of course, it is nice to win at home for IVECO and I think all the team can be really happy and satisfied with the way it went in this race.”
Steffi Halm got off to a great start in her debut race, quickly making her way up to ninth position by lap three and eventually classifying in fourth place just ahead of teammate Körber to collect good accumulative points for the German team.
The second race of the day, with inverted starting grids saw the Bullen of IVECO Magirus collect a fourth position with Jochen Hahn and an eighth position with Steffi Halm. At the close of the second race Jochen Hahn was in the lead with 27 points.

On Sunday, Jochen Hahn achieved another victory in Race Three collecting another maximum 20 points and extending his advantage in the standings to 19 points. Halm shadowed Hahn and completed her third race in succession to claim second place in another fantastic race for the Bullen of IVECO Magirus. In the second and last race of the Grand Prix the Team collected a fifth position with Steffi Halm, eighth with Hahn, and ninth with Körber. The IVECO paddock welcomed the visitors of the Truck Driver’s Week End event during the two days of the Misano Truck Race. Guests were able to test drive the vehicles, speak with specialized personnel and meet the pilots of the Bullen of IVECO Magirus, who were on the stand to meet their fans. The next Grand Prix of the FIA European Truck Racing Championship 2018 will take place at the Hungaroring circuit in Hungary on June 16th and 17th. 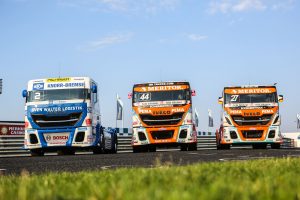 Tweet For the fourth time, the Instaforex Loprais Team will enter its Praga V4S DKR. A fully refurbished truck, with a different colour scheme, but without any major technical changes. The main... END_OF_DOCUMENT_TOKEN_TO_BE_REPLACED