Monza, 4 November 2018 – More than 30,000 people flocked to the Autodromo
Nazionale di Monza for the final day of Ferrari Finali Mondiali, where the world
titles of the four classes of the Ferrari Challenge were assigned and a great show
staged involving almost 100 Prancing Horse cars. More than 50,000 people
attended the circuit over the four days of the event despite the rain that disrupted
the first races of the weekend.

The show. The last day of the Finali Mondiali saw the presence of Chief Executive
Officer, Louis Camilleri, Managing Director of Gestione Sportiva, Maurizio
Arrivabene, and Chief Marketing and Commercial Officer, Enrico Galliera, who
presented the awards to the new Ferrari Challenge world champions and then
attended the Attività Sportive GT track show. The show started with four F60s
Formula 1 cars driven by Marc Gené, Giancarlo Fisichella, Andrea Bertolini and
Davide Rigon, who then also took part in the GT Competizioni part of the show
with the 488 GTEs competing in the FIA World Endurance Championship and the
488 GT3s of the International GT Open and Pirelli World Challenge. The official
standard-bearers were joined by the F1 Clienti single-seaters and the cars of the XX
Programmes as well as members of the Ferrari Owners Club. As well as the fans,
there were also members of the Scuderia Ferrari Clubs and many Ferrari employees
who came from Maranello.
Fabienne’s fairy-tale. The Ferrari Challenge has written yet another page in a
unique story, with its first ever woman champion. Fabienne Wohlwend triumphed
in the Trofeo Pirelli Am at the wheel of the 488 Challenge of Octane 126 for the
best possible end to a season already full of satisfaction for the driver from Liechtenstein. 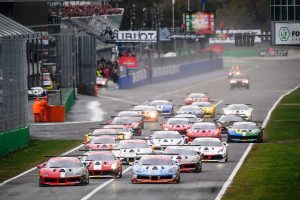 respectively by Switzerland’s Christophe Hurni and Sweden’s Ingvar Mattsson.
On the final day, the paddock was literally invaded by fans and tifosi
who got the chance to see the entire road range, as well as 40 legendary cars whose
names are inextricably linked to the history of Monza and the new Ferrari 488 Pista
Spider and Monza SP1 and SP2. For 10 lucky employees from Maranello there was
also the unforgettable experience of a hot lap in a 488 GTB of the Corso Pilota
alongside one of the Competizioni GT drivers.

TweetJust 37 days remaining to the start of Dakar Rally 2023 and one of the biggest team Tatra Buggyra ZM Racing introduced itself to the fans. As location, they chose the in front of monumental... END_OF_DOCUMENT_TOKEN_TO_BE_REPLACED