“The final British Truck Race Championship event took place last weekend 3rd 4th November at the immaculate MSV Brands Hatch circuit in Kent. Many of the teams including Team Oliver arrived early to take advantage of the two Friday test sessions. Stuart and Martin both used this track time to setup the trucks to best suit the circuit ahead of the final race weekend.

By Friday evening the team had managed to erect what was an impressive team paddock area to accommodate the large number of sponsors, friends and families that attended at the weekend. On Saturday morning, on a damp track the trucks went out to qualify for the first race of the weekend. During the session Stuart was holding his own up at the top of the timing screen, Martin also was posting very respectful lap times. Stuart’s last flying lap put him third fastest overall, then within the thirty seconds following and the rapidly changing track conditions Stuart was pipped by several following trucks and ending the session overall sixth fastest. Martin on his last flying lap posted a very respectful lap time that put him onto fourth place on the start grid for race one.

Mid-afternoon on the Saturday race one got underway, the sun was out but the circuit was still very cold and damp making the grip very unpredictable, on the rolling start both Team Oliver trucks got away very well. Martin was holding his own among the front runners and Stuart was lap by lap, one by one overtaking the trucks ahead. By the chequered flag Stuart was up to a podium finish position in third place with Martin not far behind and crossing the finish line in fifth.

On Sunday morning race two got underway with the reverse grid format, meaning Stuart was near the back of the grid and Martin in the middle. Again, the circuit was damp and cold. Martin wasted no time in moving up the order with Stuart doing much the same. Martin had without doubt mastered the technique of getting around the Kent race circuit in good time and was holding strong in third place, until the closing lap of the race when an over ambitious move by a following driver pushed Martin wide and of the circuit at Paddock Hill. Stuart found himself in a strange predicament after an incident on the second to last lap when his truck was squeezed between another and the pit wall, ending with Stuarts truck jumping up in the air and attaching itself with the steering axle up off the ground to the rear of the other truck, Stuart then became only a passenger for the remainder of the race. The result of the race was Martin finished in a very respectable fourth place and Stuart in ninth.

Race two got underway straight after the lunch break, in front of a bumper crowd many who had attended to see the race action as well as the end of day spectacular MSV firework display. Stuart as always was determined to prove he could deliver race wins. Martin started the race from the second to back row of the grid and Stuart from up at the front. When the start lights went out Stuart was off to an immediate race lead. Martin was also not hanging back and he soon made headway past several trucks ahead. Stuart drove a faultless race taking full control, so much so he won the race by a magnificent margin of more than twenty-three seconds ahead of the truck finishing in second place. Martin also did not disappoint and crossed the finish line in a well-earned sixth place.

The final race of the weekend and the 2018 British Championship started as the sun was setting. This time Stuart started from the very back of the grid and Martin from the middle. Martin quickly moved forward in the order with Stuart soon close behind, unfortunately again Martin’s truck was hit by the same driver as earlier sending them this time both off onto the grass. Martin very soon recovered and continued to the end of the race to finish in ninth place. Stuart’s truck also encountered a few race contact issues delaying his progress, however by the chequered flag Stuart was up into sixth place.

Following the final race Stuart and his team discussed the overall performance throughout the season and all members were very happy with, for another year the team’s outstanding performance, by securing no less than sixteen visits to the podium.

Unfortunately, not all was as positive as a large majority of team members within the race paddock made no secret of the fact of major disappointment due to unscrupulous, irregularities and inconsistencies made throughout the season by the championship management, all hopes are set on seeing many positive changes being implemented prior to the 2019 BTRC season.

Finally, Stuart and Martin would like to take this opportunity to publicly thank the many valued team sponsors and team members who have contributed greatly to keep TEAM OLIVER RACING at the forefront of the truck racing platform, at home and around the world. 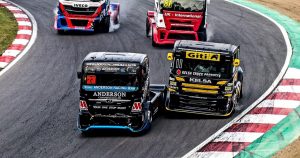 TweetJust 37 days remaining to the start of Dakar Rally 2023 and one of the biggest team Tatra Buggyra ZM Racing introduced itself to the fans. As location, they chose the in front of monumental... END_OF_DOCUMENT_TOKEN_TO_BE_REPLACED