SsangYong has unveiled the Rexton DKR to compete in next year’s Dakar Rally, the world’s toughest rally, following the brands successful campaigning of a Tivoli inspired car in the 2018 event. 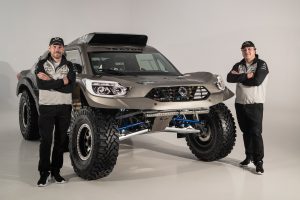 Developed by SsangYong Motorsport in Spain, the new Rexton DKR utilises a dune buggy body style with the muscular design features of the new SsangYong Rexton SUV.  The car is built to be strong, fast and light to overcome the many different challenges posed by the race.

The 11-day 2019 Dakar starts in Peru on January 6th concluding in Lima on the 17th.  With 10 hard stages, competitors race over 5,000 kilometers, 70 per cent of which is across dunes and sand, with 3,000 kilometers of special stages.  This is the tenth Dakar since moving to Latin America.

The engine is mounted in a rear-central position for balanced weight distribution between the front and rear axles, and uses a new MoTeC programmable switch to allow engine mapping changes in real time while eliminating all fuses and relays to enhance electrical reliability.  There is an all-new sequential-manual 6-speed Sadev SL90-23 gearbox, tri-disc ceramic clutch that will take up to 1,500Nm of torque, and a Torsen self-locking differential unit with a high lock capacity under acceleration.

It is equipped with 17” Yokohama Geolandar M/T G003 37X12.50R17 tyres for durability, traction and absorption over the most arduous terrain, which are fitted to Raceline 17×7 alloy wheels and can be self-inflated from the cockpit.  Lightweight Pyrotect fuel tanks are also included.

The body is mounted on a multi-tubular chassis made from chrome-molybdenum and TIG welded to give good torsional stiffness.  It has a good attack angle and aerodynamics, is agile and easy to handle.  Suspension features double arms, King shock absorbers and helical extension springs, with AP brakes providing good heat dissipation and resistance to fade.

The car will be driven by Spanish driver Óscar Fuertes with Diego Vallejo as co-driver, the same team that competed successfully in last year’s Dakar Rally in a rally car based on the SsangYong Tivoli.

With less than half of the cars completing the 2018 event, they were the second rookie team to make it to the finishing line and 32nd overall.

TweetNico Rosberg, 2016 Formula One World Champion and CEO of Extreme E outfit Rosberg X Racing (RXR), finally stepped back into the race seat for an exclusive test drive in his team’s ODYSSEY 21... END_OF_DOCUMENT_TOKEN_TO_BE_REPLACED