The British Truck Racing Association has announced that the leading supplier of new and used trucks in the UK, MV Commercial, will become the title sponsor of the BTRA Championship for 2019.

Titled the MV Commercial BTRA Championship for the forthcoming season, the announcement comes off the back of a collaborative effort between the BTRA, MV Commercial, the British Automobile Racing Club and Truck & Driver Magazine to widen the audience of fans across the UK.

Since it’s inception in 2001, MV Commercial has grown to become one of the UK’s leading manufacturer of original build crane trucks and construction recycling vehicles. Today it operates a rental fleet of more than 1,600 vehicles, and has over 280 ready to trucks for sale or hire, strategically placed across three sites in Aidrie, Haydock and St Albans, including a wide selection of Ready to Go plant trucks, tippers, grabs, recovery vehicles and trailers.

Speaking about the sponsorship Tom O’Rourke, CEO of MV Commercial, commented: “Truck racing is one of the most exciting motorsports for spectators and is increasingly becoming a popular event for the entire trucking world. We are exceptionally proud to sponsor the 2019 season and continue to help grow the truck racing scene.”

BTRA Chairman, Steve Horne, added: “We are thrilled to welcome MV Commercial as title sponsors to the BTRA Championship – it is a perfect partnership for both parties. We’ve continued to build on the strong relationship with Truck & Driver Magazine and they have played a valuable part in this deal too.

“The BTRA is renowned for producing edge-of-the-seat entertainment wherever we go and we’re excited to share that all with MV Commercial moving forward, of course of whom are no strangers to the series either.”

The MV Commercial BTRA Championship begins its season at Brands Hatch over the Easter bank holiday weekend (April 21/22) before then visiting Pembrey, Thruxton, Nurburgring, Donington Park and Snetterton, ultimately capping off the season back at Pembrey and Brands Hatch. 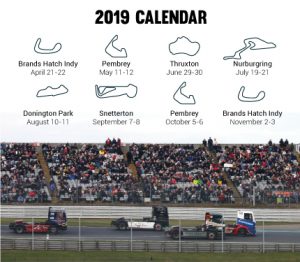 TweetCompetitive action gets underway at the Hail Cross-Country Rally, the final round of the FIA World Cup for Cross-Country Rallies, on Wednesday morning.   Qatar’s Nasser Saleh Al-Attiyah... END_OF_DOCUMENT_TOKEN_TO_BE_REPLACED