This is one coffee table book that will not gather any dust. As soon as it’s spotted, taken to hand, it will not be left down. David Hayhoe, the author of Formula 1 – The Knowledge would have been a wonderful and interesting guest on Mastermind, judging alone on what has been outlined and described in the early chapters of this 550-page hardback.

It’s a fascinating read, which must have taken years to compile. A labour of love obviously. Having known David for more than 30 years, he takes Formula 1 very seriously. Prior to the era of the Internet, David was lodging data and other related information in hand written format. Over the years since, his expanding season-by-season record notebooks were recognised and featured in various magazines, guides and yearbooks. His own publications, the Grand Prix Data Books were well received, as was the first edition of this book, with the latest update now even more comprehensive.

From an Irish perspective, it was enthralling to trawl through the vast number of charts and figure tables to seek out the few natives that not only made the grade, but also made their mark in this 69 year history book. Most notable is the mentions of Jordan Grand Prix which had a big world wide following and it was good to see Eddie’s 2005 EJ15 photo featured in the centre-section.

It was ironic, yet co-incidental that the week of receiving the signed book in the post, three time World Champion Niki Lauda passed away. Made looking up his record all the more interesting.

Guess the conversation between Niki and his great rival James Hunt in the afterlife began with covering the years since the latter’s departure from this world. For those of us still on earth, a great way to catch up is by having David Hayhoe’s Formula 1 – The Knowledge by your side!

Pictured below is the author David Hayhoe 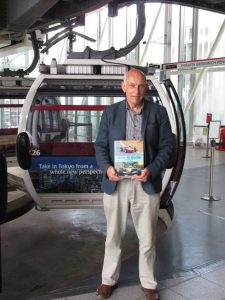