The cars driven by two Irish drivers contesting the world’s most famous motor race, the 24 Hours of Le Mans, each completed more than 4500 kilometres between the start on Saturday afternoon and Sunday’s finish.

Charlie Eastwood and his teammates finished 13th in the LM GTE AM class at the FIA World Endurance Championship (WEC) 24 hr of Le Mans after a power steering pump failure halted their chances of victory.

Racing the number 90 Aston Martin Vantage for TF Sport, Charlie put the team in a strong podium chasing position in the early stages, but an overnight mechanical issue meant the team lost valuable minutes, dropping them over seven laps behind the leading GTE AM car.

Although the 13th place was not the ideal result, Charlie was pleased with his stints and being able to help the team finish the race and secure 3rd place in the prestigious FIA World Endurance Championship.

Charlie describes his race: “In my night stint we got up to P2, the Ford was very fast but they actually ran into trouble themselves at the end. To be honest the win was very possible which was very frustrating as it would be good to end on a high in the WEC but it was still great to finish the 24-hour race.”

Before the mechanical issue, TF Sport was running comfortably in the top six, looking to challenge Team Project 1 Porsche and JMW Motorsport Ferrari for a podium position. Charlie showed strong pace in the early stages, lapping consistently in the 3 minute 55s, a front running pace.

In his night stint Charlie got up to second in class, but safety cars, full course yellows and finally the mechanical issue ended their chances of a strong result.

Even after the issues, Charlie continued to show pace on his way to setting the team’s fastest lap of a 3:54.604.

Finishing 13th in class and third in the championship in their first attempt still represents a huge achievement for Charlie and the team.

Charlie’s next race is the Total 24 Hours of Spa on the 25-28 July, this is the fifth round of the Blancpain GT Series. 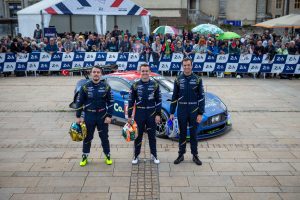 Ferrari triumphs in the 24 Hours of Le Mans

Ferrari has won the 24 Hours of Le Mans for the 36th time. It was achieved by the AF Corse car no. 51 driven by Alessandro Pier Guidi, James Calado and Daniel Serra. The victory is the 27th class win for the Prancing Horse, in addition to nine overall wins, the first one clinched 70 years ago courtesy by Luigi Chinetti and Lord Selsdon in the 166 MM Barchetta Pinin Farina. This marks the first victory in the GTE-Pro class for the 488 GTE in Le Mans as indeed for all the three drivers involved. For Alessandro and James this rounds off the Super Season in the best possible manner. The Ferrari and AF Corse team triumph had been missing since the 2014 season, when it was earned by Toni Vilander, Giancarlo Fisichella and Gianmaria Bruni. Podium also in GTE-Am class thanks to the 488 GTE of JMW Motorsport with Jeff Segal, Wei Lu and Rodrigo Baptista.

Tweet FIM Bajas World Cup, round 2 QMMF ANNOUNCES SECOND ROUNDS OF FIA AND FIM BAJA CUPS  LUSAIL (Qatar): The 2023 Qatar International Baja will be a counting round of both the FIA World and Middle... END_OF_DOCUMENT_TOKEN_TO_BE_REPLACED