M-Sport’s Managing Director, Malcolm Wilson OBE, is celebrating 40 Years in Business this summer. Since forming Malcolm Wilson Motorsport in 1979, his company has gone from strength to strength and M-Sport now operates a thriving motorsport business on the stages and circuits of some of the world’s most acclaimed motorsport series.

To celebrate, the EcoBoost-powered Ford Fiesta WRCs will carry a commemorative logo at this weekend’s Neste Rally Finland – harking back to the original Malcolm Wilson Motorsport design. Teemu Suninen and Gus Greensmith will also wear special red gloves in celebration of Wilson’s ruby anniversary, while the retro-inspired logo will appear as the profile picture on M-Sport’s social media platforms.

M-Sport Managing Director, Malcolm Wilson OBE, said: “When I started Malcolm Wilson Motorsport, I never imagined it would become what it is today. Likewise when the company became M-Sport and we moved into Dovenby Hall, I never thought we would outgrow the space. But we now have a state-of-the-art facility in Krakow and are in the midst of building the M-Sport Evaluation Centre which will provide a unique centre of excellence for engineering design and development.

“It’s really quite humbling when I look back at all the success we have achieved over the past 40 years, and how the company has grown and developed in that time. But none of it would have been possible without the hard work and dedication of every single member of the team who have passed through the doors of both M-Sport and Malcolm Wilson Motorsport.

“The business has been blessed with some fantastic people, and it’s those people who have made this success possible. I would like to say a massive thank you to each and every one of them.” 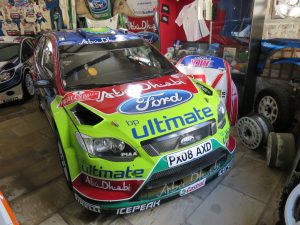 A BRIEF HISTORY OF WILSON’S SUCCESS
Founded in support of its namesake’s career, Malcolm Wilson Motorsport grew alongside the Cumbrian’s own success and was soon running customer cars on a global scale. In 1994 Wilson achieved a long-held ambition by securing the British International Rally Championship crown, and in that same year Wilson-run Escorts also won national titles in Italy, Portugal and the Middle East.

Then in 1996, Malcolm Wilson Motorsport achieved something phenomenal – the privately-run team from the edge of the English Lake District taking Jarmo Kytölehto and Arto Kapanen to the podium at the 1,000 Lakes Rally – bettering all of the factory-run Fords at the Finnish round of the FIA World Rally Championship and ensuring that the world was paying attention.

At the end of that year, Wilson was offered the Ford contract for rallying as well as competition research and development. Ford’s trust was not misplaced, and victories in Greece and Indonesia the following year saw Ford secure the runner-up spot in the FIA World Rally Championship for Manufacturers.

Work on the design of a brand new Ford Focus WRC started in Cumbria and in 1999 the new car made its debut in the hands of a new driver – Colin McRae. The car set fastest times on its debut and was a rally winner by its third event – the late, great Scotsman securing victories at the Safari Rally as well as a month later in Portugal.

Under Wilson’s leadership, the team enjoyed much success. In 2000 they moved from Wilson’s home into new premises at Dovenby Hall, and in 2006 Ford won the FIA World Rally Championship for the first time in 27 years – followed by a second successive manufacturers’ title in 2007.

Ford had to make a tough decision and withdraw officially from the championship in 2012, but Wilson kept going – continuing to work closely with the Blue Oval and keeping the Ford name at rallying’s highest level.

His dedication to the brand was rewarded in 2017 when M-Sport’s privately-run team delivered its most impressive performance to date – out-performing three of the world’s largest manufacturers to secure the FIA World Rally Championship for Manufacturers, Drivers and Co-drivers.

A second Driver and Co-driver crown followed in 2018, and the M-Sport Ford World Rally Team has become one of rallying’s most popular and successful corporations.

In its mission to be a world leader, M-Sport also continues to operate a thriving customer business – assisting Ford drivers around the world and establishing a comprehensive ‘Ladder of Opportunity’ with the all-new Ford Fiesta R1, R2 and R5 providing a clear progression path from grass root to top-level rallying.

Wilson also expanded the rally firm with a new state-of-the-art new facility in Krakow which is now responsible for all two-wheel-drive design, development and manufacture.

But it’s not just in rallying that Wilson’s team excels, and in 2013 M-Sport’s engineering excellence caught the eye of Bentley Motorsport – the two companies joining forces for an all-British assault on the racetrack.

Operating as the luxury car firm’s technical partner, success was swift and Bentley Team M-Sport secured victories at Silverstone and Paul Ricard in its debut season. In 2017, the team were victorious in the Blancpain GT Series Teams Endurance Cup, and the partnership now also operates a flourishing customer programme across four continents.

In 2018, Wilson also ensured his team were invested in up-and-coming green motorsport and joined Jaguar as technical partner for the I-PACE eTROPHY – a battery electric zero-emission series which supports the FIA Formula E Championship.

Tweet Juan Pablo Montoya, Dario Franchitti and Alex Zanardi are just some of the star-studded names who have been victorious driving for Chip Ganassi Racing. In Sardinia, Kyle LeDuc and Sara Price... END_OF_DOCUMENT_TOKEN_TO_BE_REPLACED