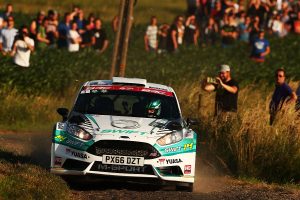 The dramatic British Rally Championship will take another exciting turn this weekend as the Today’s Ulster Rally hosts the penultimate round of the closely-fought series. The narrow, bumpy lanes of Northern Ireland have always played a crucial part in the BRC title race and 2019 will be no different, as Matt Edwards and Tom Cave come to Newry, tied on 68 points.

After a Ceremonial Start in the Albert Basin on Friday evening, nine stages will provide the gauntlet for the penultimate round of the series on Saturday. Despite the summer August calendar date, the changeable weather conditions provide the biggest challenge for the crews as the first half of the stage could be bone dry, while the final section could be covered with lashing rain – making tyre choices and driving style, all so important.

2018 Ulster Rally winner and reigning British Champion Matt Edwards will travel across the Irish Sea in high hopes after his 2018 success and recent BRC win on the Ypres Rally. Along with co-driver Patrick Walsh, the M-Sport pairing will be looking to put their Pirelli-backed Ford Fiesta R5 on the top step to back up their two wins to date so far this season.

Fellow countryman Tom Cave last visited the Ulster Rally in 2016 and will be giving it everything to go toe-to-toe with Edwards on the iconic tarmac. The Hyundai i20 R5 star is putting together a strong campaign this season with navigator Dale Bowen. Cave has Irish Tarmac form this already as the Michelin-supported driver clinched the BRC win on the West Cork Rally back in March. The title race couldn’t be closer, and those keen rally fans will be in for a monumental fight between the two title protagonists.

While the BRC title fight this year looks set to be between two drivers, a whole host of local stars who will be eager to put the cat amongst the pigeons in order to stamp their own mark on the 2019 Ulster Rally.

Draperstown man Marty McCormack and co-driver Barney Mitchell know the Northern Ireland lanes well and will want to return to the BRC podium in their Skoda Fabia R5. The pair have yet to win a round of the championship, despite coming close on several occasions, and they lead the Irish charge for a home win – something the passionate local fans would dearly love to see this weekend.

Reigning Irish Tarmac Champion Josh Moffett (Monaghan) last won a BRC round back in 2016 and could be a dark horse for honours this weekend. Along with Keith Moriarty, the duo have already clinched a podium in West Cork but on their local BRC round, the pair will be pushing for the outright win this weekend in their Ford Fiesta R5.

The Scottish crew of Alex Laffey and Stuart Loudon secured a breakthrough sealed-surface podium in Ypres on the last round, and the M-Sport Ford Fiesta R5 crew will be keen to back that up on the Irish Tarmac. Laffey joins McCormack and Moffett in a three-way scrap for the final spot in the overall championship standings as the season starts to come to an exciting conclusion.

Belfast-based driver Jonny Greer with Scottish co-driver Kirsty Riddick are Ulster specialists and with the Ford Fiesta R5 will be ones to watch on Saturday. Greer finished second behind Elfyn Evans in 2016 and pushed for the lead last year before a rare off put paid to his chances. With no title to think about, the Ulsterman will be hungry for his first BRC win – especially on an event less than an hour from his front door.

Billy Coleman Award winner James Wilson from Armagh will be hoping his home round will stop his run of bad luck in Britain’s premier rallying series. Since his win on the opening round with co-driver Arthur Kierans in the Junior BRC, the Irish crew have had a torrid season. With it being Wilson’s home round, he will be stepping into a Hyundai i20 R5 to challenge himself against the BRC top flight.

Local ace Alan Carmichael returns to the BRC after a small break and will be vying for overall points and the National Rally Cup win in his right-hand-drive Hyundai i20 R5. John Morrison and Peter Carstairs currently lead that category in their Kumho-shod Mitsubishi Evo 9 and the Scottish crew will look to take a haul of points from the Ulster to their home round – the Galloway Hills – the final round of the BRC in September.
Local stars McErlean and Creighton ready for Junior fight

Josh McErlean (Kilrea) and William Creighton (Lisburn) are separated by eight points coming into their home round of the Junior BRC – the Today’s Ulster Rally.

McErlean with British co-driver Keaton Williams have had a strong season to date with two fourths and two wins mid-season – putting them in the pound seats for the Ulster bout. William Creighton and Liam Regan are the most consistent pairing in the BRC this season with the Peugeot 208 crew having never been off the podium. The top step may have eluded them so far this season, but the Irish team won the Junior section on the Ulster in 2017 and be will throwing everything at the event to reduce the deficit to McErlean ahead of the season finale.

McErlean and Creighton will be vying for a £4,000 prize pot from Peugeot UK and TOTAL – making the fight for the win that little bit more interesting.

Welshman James Williams and co-driver Tom Woodburn dominated the previous event to take their first win of the season and one of the biggest wins for the Ford Fiesta R2T. Despite not scoring on two rounds, the young pairing sit third in the overall standings and are ready to take the fight to the locals this weekend.

Claudy driver Jordan Hone with Aileen Kelly sat alongside may be in the lone Opel ADAM R2, but that won’t stop them from fighting at the sharp-end. We have yet to see the full potential from Hone this season, but don’t discount him from the top of the timesheets this time out as the young-gun beat the BRC regulars last year on the Ulster on his way to top two-wheel-drive crew.

Ruairi Bell and Darren Garrod lead the Ford Fiesta R2T runners in the championship standings coming into the Ulster. Garrod won the event overall with Matt Edwards last year and will be hoping he can guide Bell to success 12 months on. Bell recorded his first podium last time out in Ypres and has his eyes fully focused on the €60,000 Junior WRC prize from M-Sport and Pirelli for the highest placed Fiesta in the series. Finlay Retson and Richard Crozier suffered a sizeable off in Ypres and face a race against time to get their Fiesta rebuilt. Retson won the Cadet Cup category in Northern Ireland 12 months ago and he believes he has the pedigree to overhaul the three-point deficit to Bell ahead of them.

Letterkenny ace Marty Gallagher and navigator Dean O’Sullivan switched mid-season from a Peugeot to a Ford Fiesta R2T. In Ypres, the Irishman learnt the turbo-charged machine and set some respectable times, which would have seen him on the podium had it not been for a mechanical failure. On home soil, Gallagher will be let off the leash as he looks to put the Fiesta on top of the podium and record his first BRC win since Rally Isle of Man 2017.

The Today’s Ulster Rally will start with a Ceremonial Start at The Albert Basin on Friday evening (17th) before nine stages on the Northern Ireland Tarmac on Saturday (18th) with the winners spraying the champagne at Newry High School early evening. For more information, head to ulsterrally.com
[Ends]

Tweet For the fourth time, the Instaforex Loprais Team will enter its Praga V4S DKR. A fully refurbished truck, with a different colour scheme, but without any major technical changes. The main... END_OF_DOCUMENT_TOKEN_TO_BE_REPLACED