Dutchman Vick Versteijnen and the Andorran Albert Llovera are part of Petronas Team De Rooy Iveco for the Dakar Rally 2020. Both come to the start with the Iveco Powerstar. Earlier it was announced that Janus van Kasteren and Michiel Becx will also start in Saudi Arabia as members of Team De Rooy.

Both Versteijnen and Llovera have extensive experience with trucks in the Dakar Rally. The 34-year-old Versteijnen made his debut in the Dakar in 2015 and amazed everyone by making it to the finish despite huge setbacks with the DAF. He also reached the finish line in 2016. In 2017, with a Scania, he dropped out on the last day due to a broken engine. In 2018 and 2019 the resident of Hilvarenbeek chose to take part in the Morocco Desert Challenge. His most recent rally experience was the Hungarian Baja last summer with an SSV.

“We are very happy with the addition of Vick Versteijnen and Albert Llovera to the team,” says team manager Henk van Leuven. “Versteijnen is starting with a Powerstar Evo2, which was initially reserved for Federico Villagra. Due to the crisis in Argentina, he is unfortunately unable to participate. Ton van Genugten and Maurik van den Heuvel have also indicated that they will not be part of Team De Rooy next year. With Janus van Kasteren and Vick Versteijnen however, we have two young drivers in the team who are given a free hand to go for top classifications and are also coached by Gerard de Rooy. The fast assistance is provided by Albert Llovera, for whom a Powerstar Evo3 is currently being fully adapted in Rome. Michiel Becx is going to drive an Iveco Trakker, with which he takes extra parts to support the Powerstars. Whether Gerard de Rooy himself will take the start of Dakar 2020 with the Iveco Powerstar Evo4 (with independent wheel suspension) depends on the results of a thorough test in Morocco in October.”

In Morocco, the Iveco Powerstar will be introduced to Vick Versteijnen for the first time. “I am really looking forward to that test. Driving a torpedo is not new to me, but an automatic gearbox is new and that will be quite exciting,” says Versteijnen, who will bring navigator Teun van Dal and mechanic André van der Sande with him. “It certainly is a dream come true to go to the Dakar with Team De Rooy. The opportunity came unexpectedly through Janus van Kasteren, who is a good friend of mine. When such a change comes by, it is impossible to not take it with both hands.” 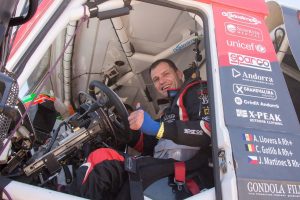