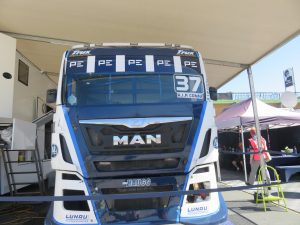 The last round of the 2019 FIA European Truck Racing Championship took place at the Circuito del Jarama, near Madrid in Spain. This much-anticipated event was the last chance for our team and partners to catch some rays of sun before heading back to the UK for the winter. After a relatively turbulent weekend at Le Mans, the team were looking forward to getting back on track at Jarama. We had great hopes that Terry and the truck would perform well to secure 4th place on the Grammar Truck Cup standings. For all the teams competing in the championship, this exciting weekend also culminated in a huge celebration of the year’s achievements at a ceremony hosted by the FIA on Sunday evening.

Despite the dynamic atmosphere at the circuit, however, the weekend started off on a sombre note: On Thursday, we received the sad news that Conni Hahn, one of our beloved friends, had passed away. Our thoughts and sincere condolences go out to the whole team at Team Hahn Racing, especially to his son Jochen Hahn. To commemorate Conni’s legendary status in the paddock and to show our support for his family, each team sported a new sticker on their trucks throughout the weekend: “R.I.P. Conni”.

The first day at Jarama was a day of two halves. To start with, the team struggled through both free practice sessions with a problem concerning a leaking water valve inside the cab which soaked our driver Terry as well as a lot of the electronics inside the truck. Fortunately, we were able to change the valve, solving this issue before qualifying at noon. Despite a couple of flying laps, Terry only managed to qualify 15th overall. With little time between qualifying and race 1, the team worked quickly to make sure the truck was serviced and ready to race. In the first race, Terry got off to a good start making the most of the extra space in front of him left by non-starting Citignola. He managed to overtake Luis Recuenco at the first few corners and was gaining on fellow Brit Oly Janes. However, whilst trying to get past Janes, Terry was pushed wide and lost his place to Recuenco. Ever the fighter, Terry managed to regain his position overtaking the number 64 truck before the end of the race. Finishing 13th overall, Terry stepped onto the podium to collect the 3rd place trophy in the Grammer Truck Cup, alongside fellow brits Oly Janes and Jamie Anderson.

The results of race 1 formed the grid for race 2 with Terry lining up on the 7th row. Once again T Sport Racing got off to a great start overtaking Oly Janes. Unfortunately, at the end of the first lap one of the trucks crashed into the tyre wall causing a red flag –the race was stopped. Only once the barriers had been repaired and the debris was cleared from the track, it was restarted. The restart went smoothly. Terry found himself between Oly Janes and Luis Recuenco and fought hard to overtake Oly. René Reinert, whose truck had suffered some damage before the red flag, restarted from the pit lane and was then working his way up through the pack. He managed to overtake Terry and was working his way past Oly Janes. In amongst the action, Recuenco locked his brakes approaching the hairpin at turn 3, crashed into the side of Terry’s truck and pushed it into the gravel. As some other competitors left deep ruts in the gravel earlier, the T Sport Racing truck got beached. Despite Terry’s best efforts, he was unable to get free and had to retire from the race. The team worked hard into the night to repair the damage on the truck and to make sure it was in top condition and ready for qualifying on Sunday morning.

The first race on Sunday afternoon got off to a fantastic start – with Terry making up 4 places by the first corner! Due to some contact between the trucks ahead, Terry kept out of trouble and managed to gain even more places. He finished the first lap in 11th position – having started 16th. As Dutchman Erwin Kleinnagelvoort received a drive through penalty, Terry was promoted to 10th position overall – i.e. 2nd in the Grammer Truck Cup. He held his place well through the race and climbed onto the podium for the second time this weekend!

The second race of the day was the final race of the season and it was destined to be a thriller. The trucks lined up on the grid with Terry in 10th position. Once again, Terry got off to a fantastic start keeping his place well. He managed to pull clear of his Grammer Cup competitors – locked in a fierce battle at the back of the field – while posting some fantastic lap times. The only Grammer Cup competitor ahead of Terry, Citignola, ran into problems and had to take a penalty promoting Terry to 1st place in the Grammer Truck Cup. Unfortunately, luck was not on our side. Just over half way through the race, our gearbox failed. This forced Terry to retire from the race.

It was not all disappointment, though. Terry’s retirement promoted our good friend Erwin Kleinnagelvoort to 1st position – his first ever Grammer Truck Cup win. Our congratulations go out to Erwin and the team!

Before the T Sport Racing team could relax and enjoy the official end of season party, we had to pull together one more time this weekend. With great teamwork, we quickly replaced the broken gearbox allowing us to load the truck onto the trailer on Monday morning before heading back to the UK. Although our last weekend at the 2019 FIA ETRC proved to be a bitter-sweet weekend filled with mixed emotions, we are pleased with our results, how we worked as a team and Terry’s podium finishes. We are now looking forward to our next home race at Brands Hatch. Stay tuned, we will keep you informed!

Tweet For the fourth time, the Instaforex Loprais Team will enter its Praga V4S DKR. A fully refurbished truck, with a different colour scheme, but without any major technical changes. The main... END_OF_DOCUMENT_TOKEN_TO_BE_REPLACED