For someone who didn’t keep a diary, Rosemary Smith’s account of a lifetime’s involvement in motor-racing is remarkable. Her much awaited autobiography is called, suitably enough, “Driven”.

And driven she was throughout her time on the rally stages and race tracks, overcoming many obstacles, some life threatening, along the way.

Over the 264 pages of this softback, Rosemary, or ‘Rosie’ to her many friends, (or even ‘Bub’ to her adoring father) recalls how she began life as a dressmaker, following in the steps of her talented mother, but once she was bitten by the rally bug there was no return. That style did stay with her throughout her life as Rosemary was well known for her elegant dress sense, even after competing in a cross-country marathon rally. The relationship with her mother however, was fractious to say the least, right throughout their lives.

Rosie took to the wheel in earnest in the sixties, competing in various rallies in Ireland, England and at Monte Carlo, the latter event probably the most famous rally of them all. As a works driver for the famous UK based Rootes team, Rosie and her beloved Hillman Imp triumphed over adversity and many of her male competitors, winning numerous Coupe des Dames (Ladies Cup) awards. An overall win at the Tulip Rally in 1965 remains her most cherished prize. Invites followed to drive many rallies all over the world, including the London to Sydney and London to Mexico endurance events as well as the East African Safari Rally. All these events are well recorded in the book, with some excellent photographs from the time.

But her life was not all glitter and glamour. As a tall, slim, attractive blonde, she had her fair share of admirers, turning down marriage proposals before eventually giving in. That turned out to be a tortuous period of her life that lasted almost twenty years. Another long term relationship practically bankrupted her and put her on the bread line. Thanks to some good friends and contacts, Rosemary got her life back. She started a driving school for Transition Year students, an interesting and welcome initiative.

Just before she turned 80, Rosie gained further acclaim by becoming the oldest woman to drive a Formula 1 car, courtesy of Renault Sport. It was a joyous occasion, and well deserved. Readers have to wait until the final chapter to discover how the thrilling experience went. Maybe this could have been the first chapter!

During the course of the read, co-written with Ann Ingle, I was curious to see if she included competing against up and coming socialite Tara Browne, (born at Castlemagett and formerly of Luggala) in the Mercantile Credit Trophy Road Race at Rathdrum, County Wicklow, an event he won in a Lotus Elan. Alas no, she did however mention his cousin Lord Altamont (from Westport House) who was one of a group of representatives on an Irish tourism promotion trip to the USA.

Thanks to early tuition from her father John, a garage owner in Rathmines, many of the tips he gave came good when behind the wheel, especially when the pressure was on and the car may not have been going well.

Memories of her Imp still remain and she recalled when An Post acknowledged her success on the ‘Tulip’ in the rear-engined speedster with a specially commemorative stamp in 2001 of her driving car No 35. “I was honoured to see myself on a postage stamp,” she said. We are honoured to read about her interesting life and career, though probably there is another selection of chapters in the pipeline yet. 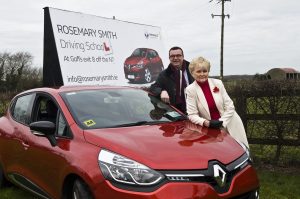 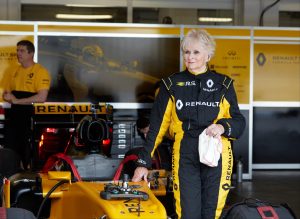 Tweet Juan Pablo Montoya, Dario Franchitti and Alex Zanardi are just some of the star-studded names who have been victorious driving for Chip Ganassi Racing. In Sardinia, Kyle LeDuc and Sara Price... END_OF_DOCUMENT_TOKEN_TO_BE_REPLACED