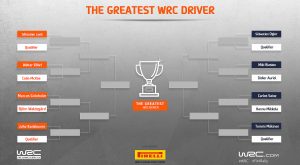 Rally fans across the globe are being urged to make their vote count in WRC Promoter’s hunt to crown The Greatest WRC Driver of all time.

The winner will be revealed at the culmination of a month-long search, supported by WRC tyre manufacturer Pirelli, in which WRC fans and an expert panel of journalists vote for their greatest in a series of head-to-head driver battles.

All 18 champions since the introduction of the FIA World Rally Championship drivers’ title in 1979 are joined by two wildcard entries – nominated on their performances – to rank the sport’s top 20 drivers.

All are WRC greats – but who is the greatest of all?

And what defines the greatest? It could be world titles or rally wins. Or other factors such as sheer speed, bravery, tactical nous, mechanical sympathy. Or all of these together.

A tournament-style draw brings drivers into a head-to-head contest against each other. Every day, fans have the chance to vote for their favourite from each pairing on the WRC’s official wrc.com website.

The 20 drivers have been seeded based on titles, rally wins and podiums. The lowest eight seeds take part in a qualifying round, with the four winners from the driver duels joining the top 12 seeds in the first round.

The eight round one winners progress into the quarter-finals, followed by the semi-finals. The final will reveal The Greatest WRC Driver.

The competition starts with the qualifying round on Monday 6 April when voters are asked to decide the initial four driver duels between:

As well as voting daily, fans will be invited to predict how the tournament results will shape up and submit their prediction via WRC Facebook Messenger (http://m.me/WorldRally). If it matches the final version after voting is completed, they will be entered into a draw to win a prize from Pirelli and a one-year subscription to WRC+.

Tweet Three MINI JCW Buggy in the line-up Further route details announced Today, the ASO, the organiser of the Dakar, presented the route of the 2022 edition in Saudi Arabia! The official start will... END_OF_DOCUMENT_TOKEN_TO_BE_REPLACED