Fifty years ago this weekend saw the start of what has gone down in history as the toughest and greatest car rally of all time. The 1970 World Cup Rally, an epic adventure of some 16,000 miles (25,750km) over some of the toughest terrain on earth commenced on Sunday, 19 April 1970 in London, finishing up six weeks later in Mexico City. As a challenge in adversity, endurance and sheer spectacle, it’s unlikely to ever be surpassed. 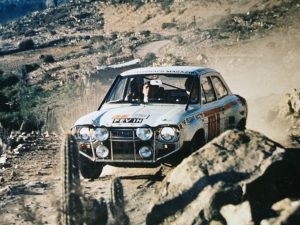 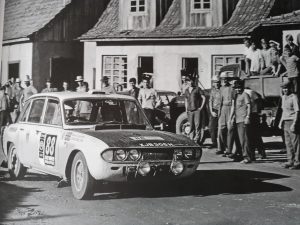 As the name suggests, the World Cup Rally had a close football link. It started at Wembley Stadium in London, scene of England’s triumph in the 1996 World Cup, and concluded at the Aztec Stadium in Mexico City just prior to the start of the 1970 competition. Along the way it passed through many of the football mad nations eagerly anticipating the pending soccer tournament that summer. With enthusiastic backing from the UK’s Daily Mirror newspaper, and entries from the leading manufacturers and competitors of the day, the Rally garnered huge publicity in the build-up to the event and throughout its six week adventure.

The World Cup Rally wasn’t the first endurance rally event of this type; two years previously had seen the London to Sydney Intercontinental Marathon. At 10,070 miles (16,206 km), that was no walk in the park, but overall the feeling was that it didn’t challenge the competitors to the extent that many had expected, with the organisers having put generous time schedules in place to encourage stragglers to keep going.

That certainly wasn’t going to be the case on the 1970 World Cup Rally, with Clerk of the Course John Sprinzel determined to test every competitor and car to their limits. Not only were crews expected to adhere to punishing schedules that required them to drive day and night with only the occasional rest halt, but they had to take in challenges such as altitude sickness, blocked roads, recalcitrant border police and a whole lot more.

Following a ceremonial start at Wembley, 96 competitors crossed the English Channel to France, heading east though West Germany, Austria, Hungary and Yugoslavia (comprising the modern countries of Serbia, Kosovo, Montenegro, Bosnia, Croatia and Slovenia) before heading back westward via Italy, France, Spain to Lisbon in Portugal from where the cars were shipped to South America. To give a perspective of how difficult the rally was, this was considered the ‘easy’ part, yet there was only one overnight rest halt (in Monza near Milan) for the entire section – in fact during the 15 day South American section there were a mere four official overnight rest halts.

Following the two week sea crossing, crews flew to Rio de Janeiro to be reunited with the cars before beginning an extensive tour of the South America sub-continent, taking in Brazil, Uruguay Argentina, Chile, Bolivia, Peru, Ecuador and Colombia. After a further sea voyage, the final leg saw the remaining crews tackle the toughest roads on offer in Panama, Costa Rica, Nicaragua, Honduras, EL Salvador and Guatemala, before finally arriving in Mexico City on May 27, 1970.

Rather than restrict competitors to run homologated rally cars, the organisers adopted a laissez-faire approach to what was eligible  – basically as long as it was on four wheels it could take part. This led to a rather eclectic, and in some cases, wholly unsuitable, selection of vehicles taking the start, including a VW Beetle based Beach Buggy with canvas roof, a Ford Escort Elba Motor Caravan and a thirteen year old Rolls Royce Silver Cloud. Unsurprisingly, none of this trio were to make it to Mexico. 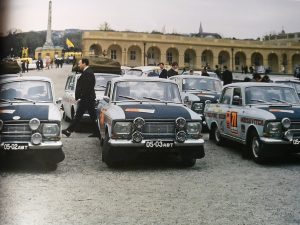 At the serious end of the competition, Ford and British Leyland entered multiple vehicles, while Citroën’s six DS21s, although ostensibly private entries, were full works cars to all intents and purposes. Four Hillman Hunters (the winning car in the 1968 London – Sydney Rally) and a team of five rugged but slow Moskvich 512s from the Soviet Union were among the other significant entries, as well as a very rapid privately entered Porsche 911 driven by Terry Hunter. 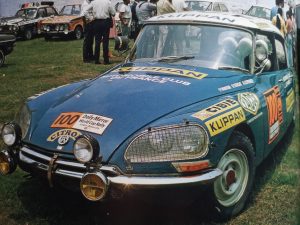 Ford entered seven Escorts, though rather than run the highly tuned Twin Cam or BDA engines that had been very successful in shorter events, it opted for an 1850cc bored out version of the dependable Kent engine producing just 140hp. This decision was made not least for the ability to readily swap parts with standard cars in remote areas should the need arise, but also as there were concerns about the quality of petrol in South America.

British Leyland decided to hedge its bets, entering a trio of the powerful if rather large and unwieldy Triumph 2.5PI Mk II, as well as three of the newly launched and unproven front wheel drive Austin Maxi, and a single Mini 1275GT. This latter car, though undoubtedly quick, wasn’t expected to last the rougher stages and indeed succumbed to engine problems early on. Five privately entered BMC 1800s were also to prove to be quite competitive.

Unsurprisingly the event attracted many of the leading rally competitors of the day including Hannu Mikkola, Roger Clark, Andrew Cowan, Paddy Hopkirk, Tony Fall, Rauno Aaltonen and Brian Culcheth. Indeed Irishman Paddy Hopkirk, a former winner of the Monte Carlo Rally and runner-up on the 1968 London – Sydney Rally, was instrumental in the event happening in the first place, following a conversation with publicist Wylton Dixon in 1969 which kick-started the whole idea. 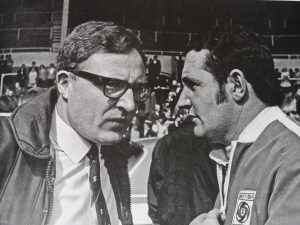 There was also another significant Irish presence in the form of leading lady driver Rosemary Smith. Driving one of the works Austin Maxis, she formed part of one of five all-female crews to take the start. 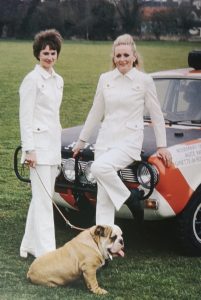 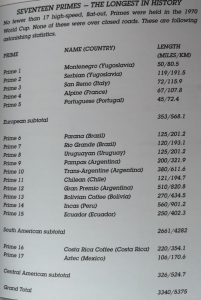 Rosemary Smith (r) with Alice Watson at the start in London

As well as the regular professional drivers and privateers, the Rally attracted some celebrity entrants, notably HRH Prince Michael of Kent in a works Austin Maxi, and England football star Jimmy Greaves who shared a Ford Escort with Tony Fall, the pair going on to finish a highly creditable 6th despite suffering innumerable setbacks.

Before the start, two of the major decisions that had to be made were whether to carry oxygen in the cars to combat the high altitude sections in the Andes, and whether to go with two or three crew. While three would allow more rest-time for exhausted drivers and co-drivers, the extra weight of a third passenger could be crucial. In the end Ford and Citroën decided two was the optimum number, but only Brian Culcheth of the leading British Leyland runners decided to go with a single co-driver, all the other Triumphs and Maxis opting for three.

Once the rally started, crews quickly found that just completing the road sections was challenging enough, with crews often having to set average times faster than the maximum permitted speed limits just to reach the next time control without penalties. That was nothing though compared to the special stages, or Primes as they were called. No fewer than 17 such flat out stages totalling 3,340 miles (5375 km) were on the schedule, with lengths ranging from 45 miles to an incredible 560 miles (900 km). All held on open roads with the possibility of meeting other traffic, an impossibly high average speed was needed to clean the stages in most cases – crews would have had to average over 83mph (134kmh) on some of the Primes to avoid penalties – and some of them came very close to doing so!

The official results record that Hannu Mikkola and Gunnar Palm in a Ford Escort were the winners of the World Cup Rally 1970, leading home just 23 of the 96 cars that originally left London. While the Triumphs of Brian Culcheth and Ireland’s Paddy Hopkirk took second and fourth respectively, it was a major success for Ford, whose cars finished 1st, 3rd, 5th, 6th and 8th. It heralded the launch of the Escort Mexico road car a few months later, while FEV 1H, the winning car (a model of which takes pride of place in this writer’s collection and is pictured here), was immediately retired to Ford’s museum from where it still makes occasional appearances at events such as Goodwood. 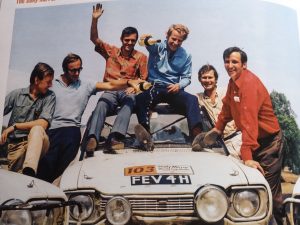 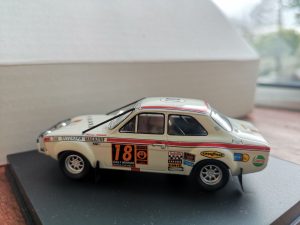 Ford celebrations ………. and that cherished model!

It could all have been so different however. During the European leg of the event, Roger Clark’s Escort started to experience serious problems when the rear axle tubes started to split, likely  having been caused by the weight of the 28 gallon fuel tanks the cars needed (the Hillman Hunters carried a whopping 37 gallons). With axle changes forbidden, Roger flew back to the UK while the cars were on the high seas to South America to design and test a bridge piece to prevent the axles from falling apart. These were duly carried onboard in hand baggage to Rio and fitted to the cars on their arrival. The rest, as they say, is history.

The other major newsworthy story was that Rosemary Smith and her co-drivers Alice Watson and Ginette Derolland not only claimed the award for highest finishing ladies in their orange and white striped Austin Maxi after an event long battle with the Citroën of Claudine Trautmann, but they also finished a superb 10th overall. This despite a scary incident on a stage in Bolivia where, during a breakdown when Rosemary was ingeniously replacing a broken fan belt with a pair of her tights, co-driver Alice Watson was taken seriously ill with insect bites. Despite having to detour to a hospital in La Paz and losing many hours, the ladies continued undaunted.

Of many fascinating stories of ingenuity, escapades and near misses, my favourite is from the longest Prime of the rally, the monstrous 560 mile Cuzco to Huancayo stage in Peru. The Ford Escort crew of Tony Fall and Jimmy Greaves suffered puncture after puncture, probably due to earlier problems with wheel studs shearing. After puncture number 10 and having finally exhausted all variations of mixing and matching tubes and tyres, Fall told Greaves – note, a World Cup winner with England just four years previously and a genuine world famous star – to flag down a passing bus in order to go ahead to the next Ford service point and bring back some fresh rubber. In fairness Jimmy took it all in his stride, though to add insult to injury he didn’t even make it as far as the Ford service – the bus turned off the route before reaching it! 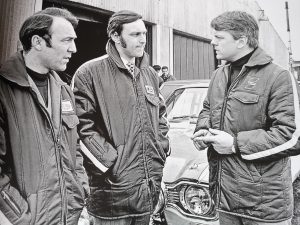 Incidentally, the winner of that 560 mile Prime, Hannu Mikkola, took no less than 12 hours 21 minutes to complete the stage, the majority of which was at very high altitudes of around 11,000 feet (3353m). Imagine that on a modern World Rally round? Perhaps even more amazingly, the top three on the stage were separated by only 18 minutes – after 12 hours of rallying! Meanwhile most of the other competitors were taking many more hours to complete the stage, after which they had to then immediately drive several hundred more miles before reaching the rest halt in Lima.

And that probably answers the question of ‘could there ever be a modern World Cup Rally like the 1970 event?’. No more than the sadly recently deceased Stirling Moss’ magnificent achievement on the 1955 Mille Miglia – a 1,000 mile race on open roads, events like the World Cup Rally belong in the past. Health and safety requirements – and societal changes – make them, quite rightly, impossible to replicate. But that doesn’t mean we cannot admire and appreciate those who tackled and overcame the adversities and challenges that such events posed.

A toast on your fiftieth, World Cup Rally 1970, we may never see your likes again. 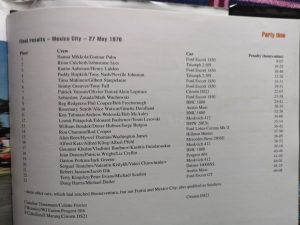 Note: Much of the information and images for this article was taken from motoring journalist Graham Robson’s excellent The Daily Mirror 1970 World Cup Rally 40 – The World’s Toughest Rally in Retrospect (published by Veloce (www.veloce.co.uk) – ISBN: 9781787112285) to commemorate the Rally’s 40th anniversary. Sadly this book is currently out of stock though copies may be found online. 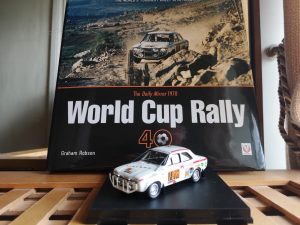 Changing of the Guard at Buggyra Dakar Racing