The Toyota Gazoo Racing World Endurance Championship team, (WEC) would have been aiming for a hat-trick of wins at Le Mans 2020, as the curtain slowly closes on the stellar career of the Toyota TS050 Hybrid, the latest TS car. With no race at La Sarthe thanks to Covid-19, we take a look back at the highs and the lows – and there have been both – of our Hybrid WEC cars, together with some rare images we’ve never issued before. 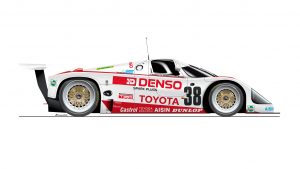 Toyota’s first participation at Le Mans was in 1985, but victory would not be achieved until 2018.

Toyota’s first foray at Le Mans began in 1985, with the TOM’s 85C, the No36 car finished in 12th position.  Returning in 1986, the car to take on the challenge of the Circuit de la Sarthe was the Dome 86C, but reliability issues took the two competing cars out of the famously punishing race.  In 1987 the Toyota 87C took to the circuit but again reliability issues dashed the hopes of both participating cars. Despite these setbacks, Toyota’s persistence at Le Mans was rewarded in 1988 with the Toyota 88C finishing 12th and 15th in Group C1.

In 1990 Toyota secured their best ever position at Le Mans with the Toyota 90C-V finishing in sixth place.  From 1991, the FIA Group C category opened the competition to high tech sports cars with Formula 1-style 3.5-litre V10 engines.  The TS010, designed by Tony Southgate developed around 600 bhp in Le Mans trim and made its 1991 debut at the Autopolis circuit in Japan in the final race of the season.

The 1992 24 Hours at Le Mans and 60th race there, saw a three-car line-up of the TS010 alongside two 92C-V cars.  The chequered flag resulted in Toyota securing second place, achieving a long-desired first ever podium finish.  1993 was a repeat of 1992 with a trio of cars, with the top position of fourth place. Even though the TS010 never claimed a Le Mans victory, it was one of the fastest cars to take to the track setting lap records in both 1992 and 1993.

Following the demise of Group C, in 1994 Toyota entrusted the 94C-V to Team Sard for entry in the LMP1 class.  Unfortunately, having led for the majority of the race, last-hour problems meant the trophy slipped away again and the team took second place.

In 1995 and 1996, Toyota changed tack and supported Team Sard in modifying a Japanese GT Championship Supra to Le Mans specification, finishing in 14th place in 1995 and retiring after an accident on lap 205 in 1996.

The first competition appearance of the stunning TS020 (also known as GT One to video game racing fans across the world), came in 1998, with the three-driver No28 car qualifying in second place. The team managed to hold this position until the final hour when their car had to retire due to transmission problems. The No27 car continued to the end finishing ninth. In 1999 Toyota returned to Le Mans with a new white-nosed car and swept all competition aside in qualifying, claiming first, second and eighth on the grid. During the race however, two cars were side-lined due to separate accidents while the No3 car posted a new lap record on its way to second place, despite a late puncture. But the fabled win still eluded us.

Leaping forward to 2012, Toyota celebrated its Le Mans comeback by entering two of the newly developed TS030 Hybrids to compete in the top LMP1 category.  Both cars were now equipped with a new full-scale capacitor-based hybrid racing system which represented the merging of hybrid and motorsport technologies. The No8 car crashed out, while the No7 which had led the race, retired due to a technical problem, but Toyota was back in endurance racing and competing in the top category.

In 2013 a raft of alterations was applied to the TS030 to comply with new regulations which included improvements to the chassis, powertrain and aerodynamics to minimise the impact of weight regulation increases.  That year the cars netted second and fourth-place finishes.

The following year again saw significant changes as it introduced the TS040 Hybrid, now with four-wheel drive and a monstrous four-figure power output.  It used a naturally aspirated 3.7-litre V8 engine paired with a new capacitor system which helped Toyota No7 earn pole position and lead for long periods until retiring due to a wiring problem, although the sister car secured another podium for the team, third place.

The TS040 was updated for the 2015 season, although its combined power output remained the same and it was in the 6MJ category, the super capacitor storage was more efficient. The system was reliable achieving finishing positions of sixth and eighth.

Significant regulation changes in 2016 led to the introduction of the TS050, the latest iteration and a very different animal to its predecessor.  Now with a dedicated LMP1-Hybrid category, limitations were placed on energy consumption and fuel flow, so the engine was changed to a twin-turbo V6 petrol engine and 8MJ hybrid system running lithium-ion batteries. This year proved to be one of the closest fights in Le Mans history with Toyota and one of the most heart-breaking finishes. Leading the race on the penultimate lap, with victory finally in sight, the TS050 suffered the failure of a small part and rolled to a halt on the start-finish straight. In recognition of Toyota’s sportsmanship and determination, the ACU (Automobile Club de l’Ouest) awarded the team the chequered flag from the race, which is still on display at our race HQ in Cologne, Germany.

Toyota endured a similar experience in 2017, in which two of its TS050 Hybrid models failed to finish while the remaining car finished in ninth place. Later, as one of the higher ranked cars was disqualified, the No8 car was officially raised to eighth place.  There was however one very positive result that the team could take home.  Kamui Kobayashi smashed the circuit’s lap record during qualifying, posting a lap time of 3min 14.791 seconds, slicing more than two seconds off the previous best time for the track in its current layout. That was not the only record that tumbled during the final round of qualifying, driving the No7 car he hit an average speed of 156.471mph, faster than any other car in the 94-year history of the race.

The 2018-2019 TS050 Hybrid was largely the same as the 2017 car, which ended the season with three consecutive victories. However, every component was reviewed, with the biggest change being a weight reduction of the battery and its associated cooling system.

The super-season included two visits to Le Mans. The first took place in 2018, where the TS050 Hybrid took the chequered flag in emphatic fashion, securing both first and second place in what was Toyota’s 20th entry in this world-famous race, achieving the result that had proved so elusive on so many occasions.  The second race, which took place in June 2019, also concluded with an identical one-two finish, although a final hour drama saw the No8 car switch places with the No7 car that had looked set for victory but suffered a late puncture.

Looking to the future, the World Endurance Championship has revised its schedule for the remainder of 2020, with Le Mans now due to take place in September.  Toyota Gazoo Racing has confirmed it intends to participate in the Le Mans Hypercar Class (LMH) for the 2021 season using a race car based on the GR Super Sport.

Toyota Gazoo Racing uses its competition in motorsport activities to pursue the development of producing ever better cars. The Toyota Hybrid System-Racing (THS-R) powertrain used in the TS050 was developed at the Higashifuji Technical Centre in Japan using a four-wheel regenerative drive system that improves the reliability of the engine, electric motors, generators and batteries. These technologies will be leveraged to mass production market hybrid vehicles. 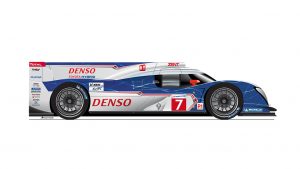