Last week the T Sport Bernau MAN team travelled to the Circuit Paul Armagnac de Nogaro for 3 days of testing. The Anglo-Spanish team was very excited to get the new truck out on track and test the new setup. It was Antonio´s first outing in the new truck of the newly formed T Sport Bernau MAN team. It was an intense couple of days for the whole team with a lot of work to be done, however the test session was very successful with Antonio completing a great number of laps during the 8-hours track time we had available each day.

Melanie Derflinger reports: “The T Sport Bernau crew set off from our base in the UK on Sunday and arrived at the Circuit Paul Armagnac de Nogaro on Monday evening. This gave the team plenty of time to build up the workshop tent and get everything set up in preparation for the week ahead. Antonio arrived at the circuit on Tuesday. It was the first time Antonio saw the newly built truck. Most of the afternoon was spent discussing the setup of the truck and adjusting the seating and pedal positions. A test of all systems and control buttons was performed on Tuesday to ensure the truck was ready to take to the track and make full use of the first of the three test days on Wednesday.

Wednesday morning brought the first time Antonio ventured onto the track in the new T Sport Bernau machine. After fixing some small issues in the morning, the day worked out very smoothly with Antonio getting plenty of track time and putting in a lot of laps. That evening, the team performed the usual evening service and also decided to change the setup after a debrief with Antonio where he gave some feedback regarding the day. The team changed the spring rates and removed and checked the differential and gearbox. The clutch was also removed and replaced as Antonio had reported that the clutch was slipping from time to time during gear changes. This kept the team working through the night, finally completing the changes at 5.30 am on Thursday morning – only a few hours before the track was due to open again for day 2 of testing.

On Thursday, the second day of testing, a professional photographer joined the team to take pictures of the team, the new truck and Antonio in action. In the morning the crew carried out further system checks. This gave Antonio some more time to get used to the new truck. In the afternoon we tested a few different brake pads and started to go through some different setup options to see what worked best for Antonio and the truck. Thursday evening was once again spent performing a daily service. The gearbox was removed a second time and the team also decided to fit a new clutch pressure plate as Antonio reported the issue with the clutch wasn´t fully resolved.

Friday brought the final day of testing. Antonio was once again able to complete a good number of laps continuing to give feedback to the engineers who were continually updating the setup of the truck, looking for the ideal setup.
Overall, we had 3 very successful days of testing. The truck performed very well, and Antonio was happy with the progress made and has requested the team to work on a few things back at the workshop in the UK. Antonio and the whole team are feeling very positive and motivated ahead of this year’s season.

Unfortunately, our data engineer Justo was taken ill just before testing began, the rest of the team wishes him a speedy recovery and is looking forward to having him back with us at the next event.

We are very excited for what is to come with this year’s championship and the whole team is feeling motivated to perform, so much that we are looking at trying to get another preseason test session booked before the season opening race in the Czech Republic in only 5 weeks’ time.” 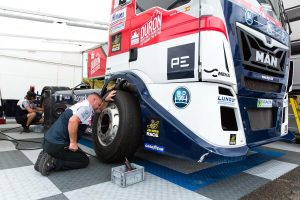