After several months of preparations, the team were well ready and excited for the 2020 FIA ETRC season to finally get underway at the end of August on Autodrom Most in the Czech Republic.

In order to conform with the current FIA championship health and safety regulations and to be able to deal with the current travel restrictions, the team did not only produce and load all of the spare parts we might need for the entire season, but we also committed ourselves to stay on the continent for several weeks until the season ends in November – if necessary. This was a decision that was made in order to stay flexible, to be able to adapt to the changing circumstances accordingly and to achieve the best possible results for our newly formed team in the course of this season.

Our trip to the opening round of the season in CZE started a couple of days earlier than usual. We decided to make a stop at garage Lunau in Germany, a workshop that we are free to use during the season, thanks to our ongoing partnership with Lunau GmbH Autoreparaturbetrieb. This also allowed us to get all the necessary paperwork and COVID tests done for our entire team before we made the final journey safely into the Czech Republic and to the Autodrom Most circuit.

After a day of setting up the paddock, Antonio and the team were eager to finally take the newly built T Sport Bernau race truck onto the track.
Testing on Friday was beneficial for Antonio as it was the first time we were able to test the changes that had been made after our tests in Nogaro a few weeks ago. Unfortunately, it didn’t take long to realise that the changes we made to the steering and the air system for the brakes were not working as hoped. The team worked until 3am on Saturday morning to check over all systems and to finally reset both the braking and steering systems back to the Nogaro test set-up, ensuring everything was working as well as possible for the 2 race days ahead.

The warm-up session on Saturday morning gave us little time to make sure the changes had been effective. At the qualifying Antonio finished P12. This was due to a lack of time to fully set up the brake air system between warm up and qualifying. The first race of the season came around and Antonio managed to get off with a really good start moving up to P6 within the first lap – gaining 6 places! Unfortunately, the race was red flagged after an incident and had to be restarted. On the restart Antonio got away well again, with another really good start. Unfortunately, a driver ahead of him missed a gear forcing Antonio to take action slowing his progress in order to avoid contact. The team was hoping to finish within the top 8. This would have resulted in a great starting position for race 2. Unfortunately, we were given a drive through penalty because of a problem with the new speed control system. Accordingly, Antonio finished in a P12 after once he served the penalty. Between races, the team had more time to optimise the setup. Therefore, Antonio was able to increase his pace and make up positions at the second race. Throughout the race, he continuously improved his lap times even further. The final result of the race left us in a strong P8, a great result showing some great promise for the rest of the weekend.

After a full service of the race truck on Saturday evening, everything was set up and ready for Sundays qualifying. This allowed Antonio to show that we could improve following the set-up changes on Saturday. We were able to progress from qualifying into the Superpole shootout for the first time with the new race truck. Antonio ultimately qualified in P9, a vast improvement from Saturday. The team were feeling confident ahead of race 3. Unfortunately, however, the race had to be stopped due to heavy rain. After a delay it was restarted later on in the day. With still extremely wet conditions out on the track, the race was started under yellow flags. This meant that no overtaking was allowed for the first lap. By the time the race finally got underway, the gap to the front runners was quite considerable. Antonio held his position finishing in P9 and the whole team were more than satisfied with the result. The timings showed that as Antonio became more comfortable with the truck and the set-up, we have the potential to be able to compete within the top 5 which is the pace we are aiming for. The team are confident that we will be able to race at that level very soon once we made a few more setup changes.

The whole team and Antonio will keep pushing as much as possible and are looking forward to the next challenge at the next round of the 2020 FIA European Truck Racing Championship. 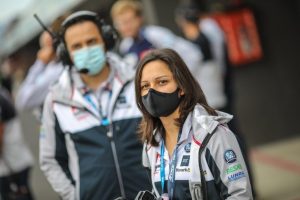