Buggyra reveals its cards and draws winning aces for Dakar 2021!

The world of Motorsport was asking whether the Tatra Buggyra Racing and Buggyra Zero Mileage Racing team will even take part in Dakar Rally 2021, – Buggyra will go to Saudia Arabia and in a style!

The Buggyra team has been racing in the Truck category since 2014 and it has achieved several stage victories and even enjoyed the position of the class leader. This time, Martin Šoltys will be joined by a three-time quad bike winner (2014, 2018 and 2020) Ignacio Casale from Chile.
“I understand him. This year, Ignacio was leading by more than 20 minutes before the final stage, and he just probably thought that he needs a new Dakar challenge and motivation,” says the team boss Martin Koloc, who was behind this shocking move.

“Just like it was with Josef Macháček, once again, the more the person has achieved, the easier and straightforward the negotiations are,” he added, while also admitting that Casale’s previous truck racing experience also played a role in this deal.
“Ignacio started with Dakar back in 2010 as a navigator of his father’s crew. Back then, they finished in the TOP 20. Then, 10 years ago, he said that he’s going to return to trucks one day and already back then he had a soft spot for Tatra trucks.”

Casale will be joined by a navigator Leon Alavor, also a Chilean, who is a previous Dakar winner from the SxS category in 2019.
“You could say there will be four Bedouins in that truck. Then, if you add Josef Macháček’s 5 victories, we’re on a number 9. I don’t know if there’s any other private team with such a collection,” says the team manager Jan Kalivoda.“

The 3-time Dakar Rally participant Martin Šoltys will race in Saudi Arabia with a Tatra Phoenix truck that is going to be fitted with the automatic gearbox for the very first time. He will be joined by a navigator David Schovánek.

“It had to come one day, but we put our bets on a proven technology,” says chief designer David Vršecký, who believes that Martin is going to have a much smoother experience in dunes.
“With a manual gearbox, you need to keep the same gear from the beginning until the tip of the dune, while the automatic gearbox is going to help with that,” he says and Martin Šoltys agrees with him. “While the new Dakar route is going to be officially unveiled on November 25th, from what we understand from the leaks so far, the new stages are going to be shorter, but much more demanding. Also, there will be much less kilometres of endless sandplains, where you drive with a pedal on the floor. Also, thanks to the automatic gearbox, it’s much less likely that you’ll go down in a dune, which is what cost me a Dakar in Peru, back in 2018. Also, I can spend much more time by driving the vehicle…”

We will not know until we are on the track

Just like in last year’s debut, one of the CanAm category S x S specials will be driven by a veteran Josef Macháček, who can look forward to a substantially improved vehicle.
“At the end of January, I and Josef sat down with a piece of paper and we agreed on everything that we have to do, so it even made sense to race at Dakar 2021. I have to say that when we got to work, I couldn’t understand how he was able to make it to the end with such an undrivable machine,” says David Vršecký.

“We have a much better buggy, which is also much easier for service,” he adds, and a five-time Dakar winner in a quad bike category agrees. He will enjoy the company of Pavel Vyoral, who is going to be his navigator.
“In comparison to January, I have a vehicle that is better by two generations. It’s just a shame, that while we have such a good machine, we weren’t able to test it properly. I’m glad that I was able to do at least some races in Poland and Germany. And according to the results from testing that took place without media, it’s looking quite promising.”

Just like Martin Šoltys, Josef Macháček also welcomes a tougher route. However, he is just cautiously optimistic for now.
“We won’t know until we are there on the track. It all looks great, with 80% of the stage in the sand. But then it turns out it’s just a 5-centimetre layer with a solid surface like a concrete underneath. So, let’s wait and see.”

Next to the Dakar legend, the Buggyra will also enter Tomáš Enge in the Side by Side category. The only Czech driver to ever race in Formula 1, a participant of the legendary races of 24 Hours of Le Mans and Indianapolis 500, explained choosing this category by pointing out the size of a truck.
“To take part at Dakar is a dream come true. I’m working hard on my physical preparation, and the head will come in play once I sit in the buggy,” says Tomáš who considers Dakar to be the icing on the cake of his Motorsport career.

“It’s going to be huge. Due to the COVID-19 pandemic, I wasn’t able to take part in a single race and I didn’t even test in the desert before. On the other hand, I think that I just need to understand how it feels to drive on the edge in dunes and to get to know all the types of sand. I don’t have a problem with driving itself…” 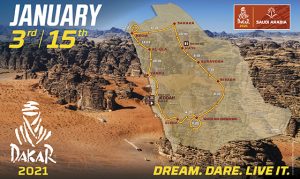