Due to coronavirus restrictions, preparation program to the Dakar in Jeddah itself resembled a mini-marathon several days long. Streams of contestants for administrative checks and scruteneering were divided by the organizers into separate groups and were carried out simultaneosly with vehicle tests, so that there were as few people as possible crossing the territory of the zero bivouac located at the King Abdullah Stadium. 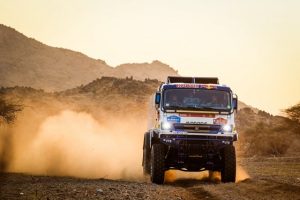 Let us remind you that a flight with Russian contestants of the race landed in Jeddah on December 27, after which KAMAZ-master team spent a 48-hour quarantine at the hotel and only after that was able to pass PCR tests for coronavirus. After negative results, the Russians received permission to pick up their vehicles at the port and start preparing for the rally.

The head of State Corporation “Rostec’, the Chairman of the Board of Directors of KAMAZ PTC Sergey Chemezov congratulated contestants on the start of the race: “Many times KAMAZ-master team has demonstrated to the whole world its high professionalism, ability to conquer and win. Confirmation of this is 17 titles of the winners at the legendary Dakar Rally. Today the race of 2021 starts, we believe in our pilots, wish the team good luck and await them with the victory!”

The crews of the current Dakar winner Andrey Karginov, Anton Shibalov, Airat Mardeev and Dmitry Sotnikov will represent Russia in the international competition.

The General Director of KAMAZ PTC Sergey Kogogin wished the team good luck: “We always set the highest goals for the team in this prestigious race. The current Dakar is not an exception. Despite all the difficulties, we believe that the team spirit for which the team is famous for will help them to cope with any difficulties and show high results again. ”

Saturday turned out busy for the team from Naberezhnye Chelny. The race crews and the assistance team arrived for administrative checks and scruteneering by 7 am. Sports officials with particular care checked the vehicles for compliance with the technical regulations of the race. The contestants themselves were waiting for the known procedures during  registration to the Dakar: providing a personal dossier, obtaining documents for trucks and installing navigation equipment, photographing and other mandatory items. A few hours later, the documents contained a stamp allowing them to take part in the competition.

Towards evening, KAMAZ-master crews went to the first start of the race – the prologue, which determined the start protocol for January 3. The best time on the 11-kilometer special stage was shown by Siarhei Viazovich on his MAZ – 6 minutes 38 seconds, his teammate Aliaksei Vishneuski was second with a lag of one second. Martin Macik (Iveco) showed the third best time (+3 seconds). Anton Shibalov (+7 seconds) has the fourth result, Andrey Karginov (+28 seconds) is 11th, Dmitry Sotnikov (+30 seconds) – 12th, Airat Mardeev (+1 minute 8 seconds) – 17th. After the prologue, all the crews went to the Dakar opening ceremony.

Initially, 321 vehicles were announced for the Dakar. 44 crews of these are in the truck category, 128 – in the car category and 125 are bikes. Another 24 crews will start in the new classification Dakar Classic – they will drive on a separate route in cars that took part in the Dakar and other large rally-raids in the 80s and 90s of the last century. Exact number of contestants in the marathon will be known at the start of the first stage on January 3, since a number of crews have already left for various reasons: positive coronavirus test results, failed checks, and so on.

“I was surprised by this number of race contestants. Last year was not easy for the athletes: there was the lack of training and competitions. I see that now everyone is in good readiness, everyone is waiting for the start of the Dakar. Of course, sport implies the presence of spectators in the stands, but the television audience of the Dakar is huge. We all need to understand the situation in which we are and be grateful to the organizers and the government of Saudi Arabia, which in difficult conditions gave the start of the race. All participants must strictly follow the requirements, then everything will work out. The example of the Dakar shows that in a pandemic one must live and move forward, not to be afraid of the coronavirus, following all safety requirements.”

Andrey Karginov, pilot of crew No 500:

“I still can’t believe that the Dakar 2021 will take place. The organizers had their own extreme, which they had faced during preparation to the race. Despite all the difficulties, we go to the start, and I am sure that all athletes want to give our fans a real sports holiday. ”

CREWS OF KAMAZ-MASTER TEAM CONTESTANTS AT THE DAKAR RALLY-2021

No 501 Driver A. Shibalov – co-driver D. Nikitin – mechanic I. Tatarinov

In 2021 the Dakar route has undergone significant changes: the rally caravan will leave for a 13-day marathon across the Arabian Peninsula counterclockwise from Jeddah and will return on the Red Sea coast in Jeddah on January 15. Two of the 12 stages – in Wadi Ad-Dawasir and Neom – will be loop ones. The second rally in history of the Saudi Arabia will take place completely on previously unknown tracks, making participation in the race unpredictable as always. The total length of the Dakar will be almost 7800 km, and the SS  distance – 4800 km.

Innovations from the organizers will help to equalize chances for success at the finish:  hands of navigators will be free from the usual paper roadmap, and information about the route will be downloaded into the electronic roadbook 10 minutes before the start of the stage. There will also be fewer high-speed straight tracks, which will affect more powerful vehicles and experienced participants. Moreover, a speed limit of 90 kmh will operate on especially dangerous route sections, thereby ensuring safety of athletes.

Start of the truck classification at the first special stage along the route Jeddah – Bisha is scheduled for 12:55 pm on January 3. The rally contestants will travel to the south of Saudi Arabia. Almost the entire distance of the special stage, 277 kilometers long, will run on ground surfaces. Stony areas can be tricky and will make crews be careful when crossing them to keep the tires intact.

Tweet As Extreme E heads to Senegal for the Ocean X Prix, we talk to off-road rally legend and Extreme E Championship Driver, Jutta Kleinschmidt about her memories of  Dakar and why she’s looking... END_OF_DOCUMENT_TOKEN_TO_BE_REPLACED