An enthusiastic western rider, Steffen Faas runs a horse and equestrian farm together with his wife Sandra, restores classic cars (preferably Porsches and the 964 model is his favourite) and of course he is a truck racer. The 37-year-old’s everyday life spans from one horsepower to nearly 1200 horsepower.

After a one year hiatus from racing, Faas returned to the FIA ETRC for the 2020 season, in his eye-catching grey-red Scania. Only Dutchman Erwin Kleinnagelvoort competed with a Scania in the ETRC in the last few years. But despite the little support from the Swedish, for Faas it was always going to be a Scania: “I did my truck drivers licence in a Scania. I felt so comfortable in it and have been a fan of the brand ever since. Later I drove many other trucks, but the preference for Scania remained.” 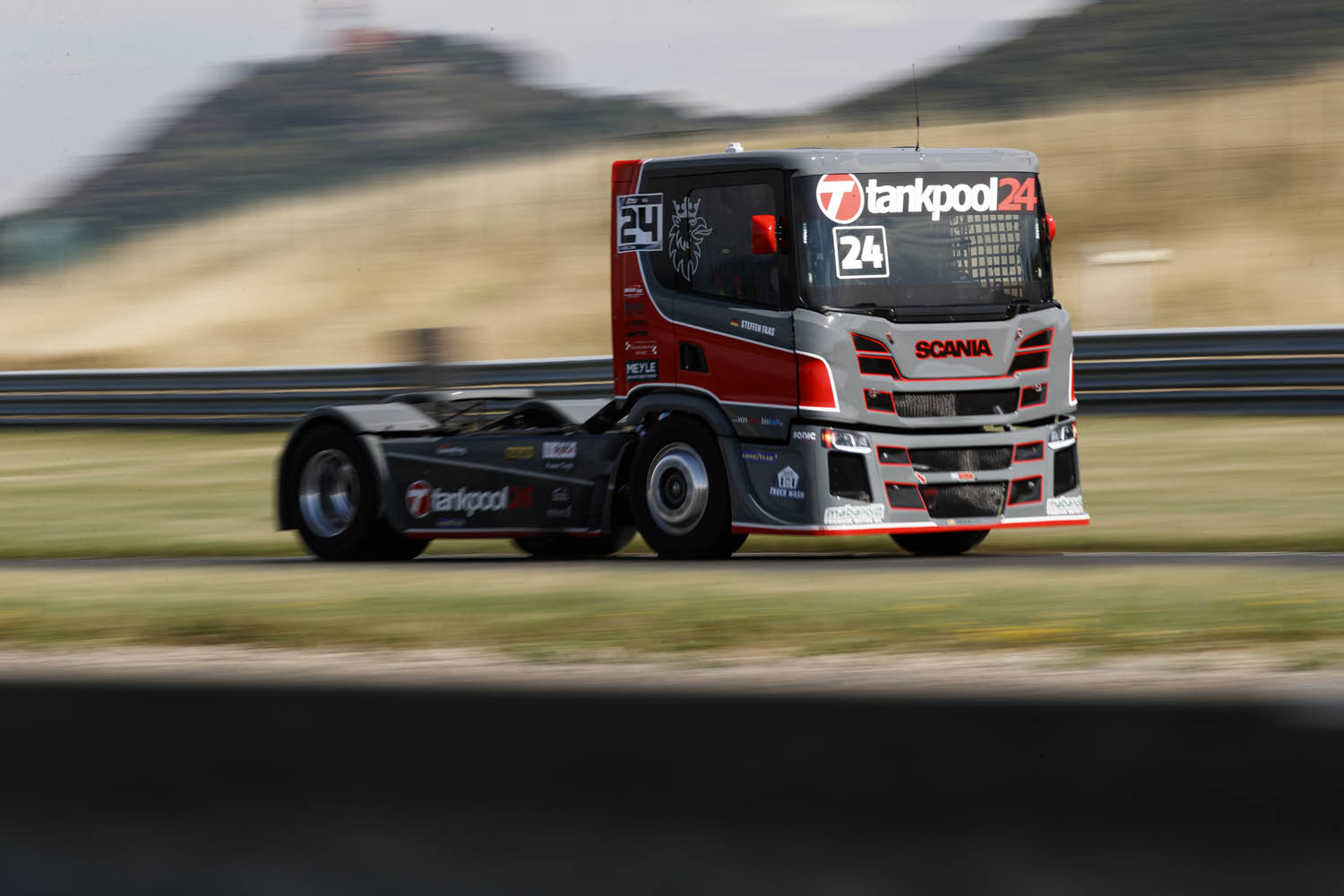 Faas parents ran a car dealership, which explains his enthusiasm for technology and engines. But there were also western riders, which is why Steffen pretty much grew up with horses, something he has in common with his wife Sandra. After getting married in 2013 they took over the horse farm in 2014.

In his younger years, Faas had a lot to do with engines, but little with motorsport. He drove many trucks while he worked for a friend who built high-quality horse transporters. For years Faas and his buddy delivered the finished vehicles on adventurous tours all over Europe. It was quite possible that they would find out the night before departure that it was not only the transporter but also a load of horses that had to be moved, fed and watered on the way.

Steffen’s motorsport career then began rather unusual: he got into racing via a casting show. In the early 2000s, Seat and German TV station SAT 1 were looking for a racing talent. Faas prevailed in the scouting process as well as in the qualifying races and eventually won the casting. He subsequently competed in the Polo Cup and returned to Seat in the VLN endurance series, which he also won with his team-mate. Later he raced in the Touring Car Challenge with an old BMW, but his motorsport career ended when he couldn’t find sponsors. In 2015, thanks to a few coincidences, the opportunity opened up to get back into motorsport, when a sponsor funded Faas’ entry in the KTM X-Bow Battle series. The Black Forest native promptly won the series in the two following years.

The first contact with truck racing however came long before then. In 2007 Faas coincidentally met Jochen Hahn – the two actually live in the same area. At the time, Hahn promised him that he would be allowed to test-drive his racing truck “sometime”. However, it took a full ten years before Steffen Faas had the opportunity to remind his now quite successful neighbour of his promise.

When the truck racers tested in Most in 2017 before the start of the season, Faas was there. The outcome of the test drive: he got to start at the FIA ETRC race at the Nürburgring in an Iveco and was then offered the opportunity to drive a full season in the Tankpool24 team the following year.

In 2019, the western rider wanted to compete with his own team, but had to postpone the plans for one year. “Finally in November 2019 all talks with sponsors were concluded and we were able to start building a truck,” Steffen said. He set up the truck workshop on the equestrian farm and work started. Faas is supported by his sister and father, and the people working in his racing team are all long-time friends. Communication in the team is key. ”Within the team everyone knows about every step. That also applies to the sponsors, who are informed about every test.”

In the workshop, everything around the grey-red Scania is immaculate, the tools are tidy and everything is in its place, the equipment is accurately stowed away – you can see at the first glance that a perfectionist is at work here.

The German racer wants his everyday life to be as tidy and clean, with things in their place as it is in the workshop. “Last year, everything was a bit much,” he said. “Building the race truck, converting the former machine hall into a workshop and setting it up, plus the work on the equestrian farm, which Sandra actually manages.”

Faas has to structure his day and divide his time between working on the race truck and working in the car dealership. And of course there needs to be enough time to take care of his own fitness and to ride Heidi – the good-natured horse with which Faas perfectly masters the tricks of a western rider. If he succeeds in this balancing act, he is convinced that things will also go well for him on track in 2021.

Tweet As Extreme E heads to Senegal for the Ocean X Prix, we talk to off-road rally legend and Extreme E Championship Driver, Jutta Kleinschmidt about her memories of  Dakar and why she’s looking... END_OF_DOCUMENT_TOKEN_TO_BE_REPLACED