Rallying like many other sports has taken a sabbatical due to the Covid-19 pandemic, but with events being planned for 2021, 25 year old Kyle White from Dunmurry is coming back with a bang! “We have decided to tackle the Motorsport UK British Rally Championship (BRC) for the first time in our Peugeot 208 R2. The Junior BRC category this year is offering a once in a lifetime prize and this is my last and only chance now to enter the category as it’s only open to drivers who are under 26” said Kyle.

Kyle also sees the Junior BRC as an important step to further his goal to take the Billy Coleman Young Rally Driver of the Year award and be part of the Motorsport Ireland Rally Academy. If he was to win the Junior BRC, the prize could be career changing for Kyle and his co-driver Sean Topping from Rathfriland.

Indeed the winner of the 2021 Motorsport UK Junior British Rally Championship will be offered an opportunity to contest a round of the FIA World Rally Championship (WRC), behind the wheel of a Hyundai Motorsport Customer Racing i20 N Rally2. Hyundai Motorsport Customer Racing are fully behind this and the Junior BRC champion will have the use of the latest generation Rally2 car from the WRC squad, with additional support from the BRC at a European round of the World Championship in 2022.

“There is no doubt that it will be quite a challenge and with that prize on offer the competition will be serious! The first round in May is based at Oulton Park race circuit, and I like those sort of events, as it will be similar to the rallies at Kirkistown and Bishopscourt here. Then we head into the forests of Wales, Scotland and England, which of course I have never seen. I’m hoping my success on gravel in 2019 with the 208 on the Motorsport Ireland Irish Forest Rally Championship will stand me in good stead on those rallies. The last round, the Ulster Rally based around Newry is the one I would be most familiar with and we would be very much looking forward to that one.”

Kyle’s 1600cc front wheel drive Peugeot 208 R2 was fresh to the team in 2020 and has benefitted from a recent brand new engine, which he believes has improved the car further. His first 208 R2 took him and co-driver Sean Topping to four forestry category wins in 2019.

However the Junior BRC is open also to a newer generation of car, the Rally 4 cars, 1.2 litre turbo charged machines which possess more power and torque. “I don’t see the R2 car as a big disadvantage. I know the 208 well know and it’s strengths. It’s very responsive and we had a recent test in the car at Shackleton which went very well. I also have a familiar and ultra-reliable co-driver with Sean Topping, and a great service crew, so we have a good team.”

Any support is always welcome for the family run team, but thanks to continued assistance from Finaghy Cleaning & Support Services, LA Distribution NI Ltd, Jetvent Limited and Gary White Car Sales the young motor engineer is able to head off in search of this great rallying prize. 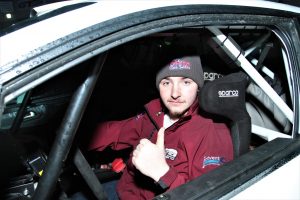 Tweet As Extreme E heads to Senegal for the Ocean X Prix, we talk to off-road rally legend and Extreme E Championship Driver, Jutta Kleinschmidt about her memories of  Dakar and why she’s looking... END_OF_DOCUMENT_TOKEN_TO_BE_REPLACED