His name stands for perfection, fighting spirit and passion – Michael Schumacher is still widely considered to be the best racing driver of all time. He went from humble beginnings to the top of Formula 1 and dominated it for many years – with seven world championship titles and a total of 91 victories. The documentary SCHUMACHER traces his path from the Kerpen gravel pit to global superstar.

The long-awaited documentary, which can be seen exclusively on Netflix from September 15, does not only portray his incomparable career, though. Thanks to rare interviews, never-before-seen archive material and the support of his family, the many facets of his multi-layered personality are shown unfold.

In addition to his father and his brother Ralf, Schumacher’s wife Corinna and his two children Gina and Mick, by now a Formula 1 driver himself, speak openly for the first time, as do his closest peers and competitors. Among them are Jean Todt, Bernie Ecclestone, Sebastian Vettel, Mika Häkkinen, Damon Hill, Flavio Briatore, David Coulthard, Willi Weber, Luca di Montezemolo, Piero Ferrari, his manager Sabine Kehm, and many more. They tell the story of a passionate fighter who pushed the boundaries of his sport further and further, and of the absolute team player who always treated people with high regard and respect. 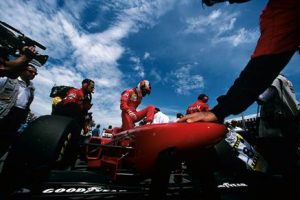 The timing of the release commemorates Schumacher’s entry into Formula 1 which he accomplished, almost to the day, 30 years ago.

Sabine Kehm: “Michael Schumacher has redefined the professional image of a racing driver and has set new standards. In his quest for perfection, he spared neither himself nor his team, driving them to the greatest successes. He is admired all over the world for his leadership qualities. He found the strength for this task and the balance to recharge at home, with his family, whom he loves idolatrously. In order to preserve his private sphere as a source of strength, he has always rigorously and consistently separated his private from his public life. This film tells of both worlds. It is his family’s gift to their beloved husband and father.”

Benjamin Seikel and Vanessa Nöcker from B|14 FILM GmbH were responsible for the production of SCHUMACHER. Hanns-Bruno Kammertöns, Vanessa Nöcker and Michael Wech directed the film.

Benjamin Seikel, Producer: “The documentary was a big challenge and needed a lot of time and sensitivity, considering the pressure that was put on the production from the outside. But thanks to a great team and a really great collaboration with the family, we didn’t let ourselves get rattled. We’re grateful that it’s finally getting underway and excited about its global release on Netflix. The film was always intended to be an international documentary and we’re confident it will be embraced as such.”

Vanessa Nöcker, producer and director: “The greatest challenge for the directors was certainly to find the balance between independent reporting and consideration for the family. Corinna Schumacher herself was our greatest support in this. She herself wanted to make an authentic film, to show Michael as he is, with all his ups and downs, without any sugarcoating. She was great and brave enough to let us do what we wanted, and so we respected and kept her boundaries. A very inspiring, warm woman who made a lasting impression on all of us.”

London based Rocket Science is representing sales and distribution of the film worldwide and facilitated the partnership with Netflix.

Kai Finke, Director, EMEA TV Licensing Netflix: “This deeply personal portrait of Michael Schumacher will inspire and touch his fans that followed his career, and introduce this iconic personality to our members worldwide who may not be familiar with the star’s huge Formula 1 accolades.  We would especially like to thank Rocket Science, the producers, and Michael Schumacher’s family for their great trust.”

Combining exclusive access and interviews with never before seen footage shot by Oscar winning director D.A Pennebaker (“Bob Dylan: Don’t Look Back”) this 3-part documentary series explores the rise and fall of automotive icon John DeLorean, the poster boy of late ‘70s corporate greed. Epitomising these hubristic times with his grandiose vision of the car of the future, the series will show how John DeLorean came to captivate the world.     Watch The Trailer https://youtu.be/p8rWz9np3W4

As Gotham Garage’s star rises, Mark broadens his business strategy beyond “upgrade and trade” as he courts clients with big ideas and deep pockets. 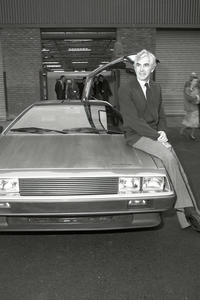 Tweet On the way to its debut in the famous Dakar Rally in January 2022, Audi Sport has tested the Audi RS Q e-tron for almost two weeks in Morocco under the most extreme conditions. After testing in... END_OF_DOCUMENT_TOKEN_TO_BE_REPLACED

The Italian Baja, the eighth and penultimate...