Book Review: Fiat in Motorsport – Since 1899

The first look at the cover of this book evoked childhood memories favouring one of the best looking and high performing world rally cars of all time. Referring to the Fiat 131 Abarth featured on the sleeve of Fiat in Motorsport – Since 1899, written by Tiny Bagnall, just released by Veloce Publishing.

A poster of this distinctive blue and yellow coloured rally car with Olio Fiat logos emblazoned on it was once proudly seen on the wall of my old bedroom. This memory still holds strong.

Veloce, incidentally published a book dedicated on the 131 Abarth under its Rally Giants series, which is still available.

While keen to retrace the 131’s  many world rally stage wins from Tony’s wonderful research and photo collection, there was a lot more to discover.

Fiat, one of the longest established automotive brands has claimed much success on the circuits, rally events and off-road meetings across the globe. This 160 page hardback covers over 120 years of motorsport heritage associated with the Turin headquartered brand.

Tony credits the information and photos received from Fiat Chrysler Automobiles, now subsumed into the Stellantis Group, along with Groupe PSA, and so this record is of even more significance and importance.

From the development of race cars, big performance engines and rally cars it’s all detailed here in words and with almost 200 photographs.

The first chapters is dedicated to pre and post-War eras, with now vintage and classic road and race cars (mostly in red), performing on and off tracks, with great success.

Prior to the 131 Abarth’s triple crown of World Rally Championship victories (1977,1978,1980), the Fiat 124 Abarth Rally (late 60s/early 70s) set the scene and the standard, taking centre stage on the finish ramps many times with Finnish driver Markku Alan wearing the laurels on numerous occasions in both cars. Walter Rohrl, from Germany shared the successes in the 131, and both drivers later joined sister brand Lancia, to where WRC honours continued.

Back in 2006, the Abarth Grande Punto IRC won the European Rally Championship and the working and rally car preparation business relationship still continues to this day.

An accountant by profession Tony has previously published books on the history of motor racing in Aintree and on the Alfa Romeo 2000 & 2600. Jarlath Sweeney 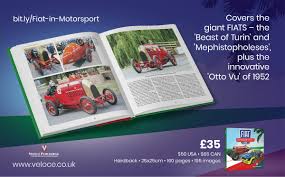