The Bahrain Raid Xtreme team has completed the 2022 Dakar with strong second and fourth places overall with Sebastien Loeb/Fabian Lurquin battling for the lead throughout the two week long event over 8,500km across the world’s most inhospitable terrain. Argentine Orlando Terranova/Dani Oliveras came home in fourth, his best finish on the event in 16 starts. After a roll earlier in the rally for Nani Roma/Alex Haro they had great pace, but for the remainder of the event, they dedicated themselves to supporting Terranova and Loeb, by running behind on the stages in case they had a technical issues.

Through the Dakar, the team has proven that sustainable fuels, like Prodrive EcoPower made from agricultural waste, can offer the same performance and range as petrol, while reducing CO2 emissions by 80%. The three Prodrive Hunter V6 turbo engines have run faultlessly over a total of more than 25,000km on the new fuel made by Coryton Advanced Fuels, with no modifications to the engine.

For the Prodrive Hunter in its all new T1+ specification, it is a result that reflects the hard work in design, engineering and set up from the UK based team who have worked tirelessly for this result. The consistency and reliability of the car has put Loeb into the lead of the all-new FIA World Rally-Raid Championship (WRRC) as the sport enters a near era.

The focus of the BRX team is now on the all new WRRC, the first round of which has been this Dakar before upcoming rounds in Abu Dhabi, Kazakhstan, Andalucia and Morocco, as the sport elevates to an FIA and FIM recognised championship that encompasses cars and motorcycles.

Sebastien Loeb said: “Second is good, at one point it was not looking so good when we had a problem in the third stage, but we finally kept the second place and we pushed hard to try and catch Nasser but he did a perfect race and it was not possible. The car was really good, the partnership with Fabian was really good and everything was fine, but the gap was too big. To be second on the toughest event in the world is a great achievement.”

Orlando Terranova said: “That was a fantastic rally. The team work was genuinely incredible as it felt like a family from the beginning as all the structure is focussed on the drivers, the crew and the performance as all here at BRX really ‘feel’ motorsport. The first week maybe we lost a little bit of time but in the second week we made some great stage times, but I feel again very comfortable as the car is fantastic and the human relationship in the team is great for our job. I really want to say thank you to the team from the top management all the way through to every technician and assistant at Prodrive: Thank you all so much.”

Nani Roma said: “I am proud to have supported the team and to have worked hard to develop the Hunter over the past few months to help make it so competitive. I’d like to say thank you to everyone at Prodrive and in Bahrain and particularly my engineer and mechanics. We have the world championship in just a few weeks in Abu Dhabi and I am eager to get back in the car and get a good result for the team.” 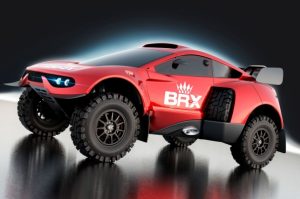 David Richards, BRX team director, said: “Dakar remains one of the most challenging motorsport events on the planet and considering this is only our second attempt we have to be very proud of what we have achieved. It’s not just about the drivers and navigators, who all did a superb job, it’s a team effort and every member of our BRX team both on the rally and back in Banbury contributed to this brilliant result. I would particularly like to recognise all the support we have had from Bahrain, without which this would not have been possible.”

TweetTOYOTA GAZOO Racing’s Nasser Al-Attiyah and co-driver Mathieu Baumel will be taking on the 2022 Rally of Morocco, as part of the 2022 World Rally-Raid Championship (W2RC).  The race will take... END_OF_DOCUMENT_TOKEN_TO_BE_REPLACED