Deemed as one of the toughest ever! Josh Moffett & Andy Hayes took their first win on the Corrib Oil Galway International Rally after a very impressive drive in extremely difficult conditions. At the end of the 15-stage event their Hyundai i20 R5 had 14.1 seconds to spare over Welsh crew Meirion Evans & Jonathan Jacksons VW Polo R5. Evans had led after the first stage, but Moffett moved into a lead he was never to relinquish, despite strong pressure from his rivals over the course of the weekend. The podium position eventually went to Callum Devine & Brian Hoy in a Fiesta R5, fourteen seconds further back from Evans.

Alastair Fisher & Cathan McCourt both saw their challenges hampered by punctures over the weekend, but nothing can take from Moffett’s superb drive. The attrition rate was high due the inclement weather conditions, and a lot of credit is due to the marshals who braved the most appalling conditions possible on the first day with gale force winds and incessant heavy rain to keep the rally running on time. The spectators were also out in force for the weekend as the first two-day rally to run since the beginning on Covid saw much interest from all over the country.

Meirion Evans was quickest out of the blocks on the opening Kiltormer stage as the forecasted rain hit just before the first stage. This made life difficult for the crews, but they all treated the stage with caution and there were no major dramas. Fisher had stalled on the start line and lost some seconds, but it was Moffett who was closest to Evans, just 2.2 seconds behind. The second stage at Foolagh near Tynagh saw Moffett move into a lead he was never to lose. Devine was in third but already 17 seconds behind while McCourt & Fisher made up the top five. Donagh Kelly was in wiper bothers and clipped a wall losing over 20 seconds and dropping to tenth overall. The third Limehill test had been shortened to just over 2 miles due to a funeral on the stage, but Fisher still forced his way into third place while Kelly dropped out of the top ten with more time lost due to the faulty wipers.

The weather turned increasingly nasty on the second loop but remarkably the top six remained relatively static with McCourt edging in front of Fisher being the only change. Daniel Cronin was settling in well in his newly acquired VW Polo while Garry Jennings who was out in a RHD Ford Fiesta R5 was running just outside the top six, although not eligible for international awards. Ryan Caldwell & Grace O’Brien were the best of the RC4 class in their little Fiesta and were already almost a minute clear of their closest rivals James Boland & John McCay.

With driving rain and gale force winds battering the stages, the competitors were put to the pin of their collars to keep their cars on the road. Moffett & Evans did fall into the clutches of the chasing pack a little more after close encounters with the scenery and it was Devine who was looking like the biggest threat to the pair. Moffett led Evans by fourteen seconds overnight but Devine in third place had closed to just three seconds. Fisher was up to fourth place as McCourt lost some time with a spin, while Daniel Cronin rounded off the top six.

Two stages – Eden Hill & Black Road – were to be attempted three times in each in what looked like a shorter day on paper but contained more competitive stage kilometers than the first day. Moffett extended his lead on the first stage, with Devine moving into second place, but a stunning time from Evans moved him back into second place after the Black Road test. Fishers’ chances of victory ended on the Black Road stage when he hit a bank and was forced to change a puncture caused by the incident. Donagh Kelly and Declan Boyle had both retired by this point while Garry Jennings survived a big overshoot on Stage 11.

The pattern on the next pair of stages was the same, Moffett extending his lead on Eden Hill only for Evans to retaliate strongly on the Black Road. Two stages to go, and only 6.8 seconds separated the pair. Fisher had fought his way back to sixth from ninth, but a double puncture knocked McCourt well out of the picture and almost into the clutches of Daniel Cronin who was having a very steady run. Stephen McCann who had been running in the top ten was another to retire and he was shortly followed by David Guest who had been suffering gearbox problems.

The final run over Eden Hill saw Moffett again extend his advantage, but he was made to sweat on the last stage with a misted-up windscreen hampering his progress. Luckily for him, Evans was having problems on his own and he came close to disaster when he hit a stone wall. He managed to take fastest time, but the margin was fourteen seconds in favour of Moffett by the end. Devine took third place, another fourteen seconds back, having been unable to match the pace of the leading pair consistently all day.

The national rally saw a lot of drama over the weekend with the lead changing a few times among the top crews. Kevin Eves led at the first service as he set some stunning times in his Toyota Corolla, making light of the awful conditions. Top GMC members Jason Black & Karl Egan were second in a Toyota Starlet, but already Wesley Patterson, Declan Gallagher and Chris Armstrong were out having gone off the road.

By the end of the second loop Eves was out having broken the rear axle after an overshoot leaving Black & Egan in the lead. Gary Kiernan & Daniel McKenna were up to third place overall with Damien Tourish, James Stafford and Marty Toner completing he top six places. GMC members Richard & James Whelan were in eighth place with Tom Flaherty & Patrick Curley just outside the top ten.

Unfortunately for Black he punctured on the penultimate stage of the day losing three minutes and dropping him back to sixth place. McKenna led from Kiernan overnight with Tourish in third place overall. The Whelan’s had lost time on stage seven which dropped them well back, and Tom Flaherty was now in the top ten.

The second day saw McKenna stay ahead until the second running the Black Road where he hit a bank and retired with suspension damage. This left Kiernan with a big lead, and he just cruised though the remaining stages to take a comfortable win the in the National section. Black & Egan put in an incredible drive over the final stage to take second overall and win the Brian Thornton Perpetual Cup for best Galway Motor Club Crew. Damien Toner & Denver Rafferty took third place, while Tom Flaherty & Patrick Curley took ninth overall. 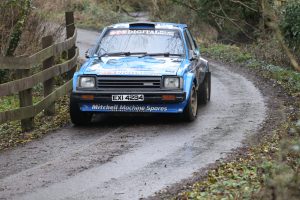 Despite the tough conditions it was a very successful return to the two-day rally format for Galway Motor Club, very competently overseen by Clerk of the Course Aiden Connolly & his team. Other Galway crews to make it to the finish were;

Tweet A packed schedule characterizes the second half of the year for Audi Sport: After the start of testing of the Audi RS Q e-tron E2 in Europe in July, the premiere on September 1, a subsequent... END_OF_DOCUMENT_TOKEN_TO_BE_REPLACED