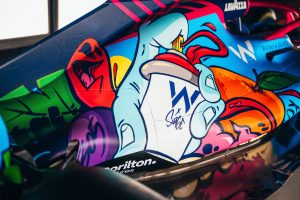 Williams Racing created a stir ahead of the first ever Miami Grand Prix, marking the occasion by collaborating with contemporary American artist Surge to give the team’s famous ‘W’ monogram a fresh look and feel.

Surge created a one-off graffiti livery which has been applied to the teams FW41 which was on display over the weekend in the W South Beach after being unveiled by CEO & Team Principal Jost Capito and Williams Formula 1 race drivers Alex Albon and Nicholas Latifi.

Sergio J. Quinonez, aka Surge, has taken his bold, unmistakable style straight from his sketchbooks to the sun-stained streets of South Florida and beyond. His latest work demonstrates his love for cartoon illustrations and vibrant colours, creating a logo and race car the likes of which have never been seen before.

After flipping the W on its head, the striking M icon features nods to Miami and shows off Surge’s unique style and featured across the Williams digital platforms throughout the race weekend.

SURGE was born in Los Angeles and raised in Miami A postgraffisim artist, he has taken his bold, unmistakable style straight from his sketchbooks to the sun-stained streets of South Florida and beyond. Surge’s love for cartoons and brilliant colors, along with a passion for hip hop culture, has shaped his artistic identity and res ulted in work that can now been seen everywhere from walls in Miami’s legendary Wynwood Arts District to live painting performances during some of the area’s most high-profile events.

Extreme E returns to Sardinia for a double summer showdown

TweetAfter the first X Prix of Extreme E Season 2, the Championship now moves from the deserts of NEOM to the historic Capo Teulada area of Sardinia, with just one month to go until the on track... END_OF_DOCUMENT_TOKEN_TO_BE_REPLACED

Test of the Audi RS Q e-tron and the Ducati...