For the second year running, IVECO will contribute to ETRA’s sustainability goals with the IVECO S-WAY LNG Pace Truck, which can cut CO2 emissions by up to 95 percent compared to diesel-powered trucks when powered by bio-LNG.

IVECO will participate in the European Truck Racing Championship (ETRC) 2022 as technical sponsor of “Die Bullen von IVECO” – the partnership between Team Schwabentruck and Team Hahn. The team’s pilots will compete on the new IVECO S-WAY-R racing trucks which have been upgraded to enhance their trademark powerful performance and further reduce their emissions.

IVECO is the official partner of the FIA European Truck Racing Championship for the 2022 season, following the agreement signed last year with European Truck Racing Association (ETRA) to extend their longstanding partnership until the end of the 2023 season. The brand will contribute to the ETRA’s sustainability goals to reduce its carbon footprint with the environmentally friendly IVECO S-WAY LNG, the first ever Pace Truck with alternative traction in FIA-ETRC. In the path to the target of net zero by 2038, FIA ETRC is implementing actions across its operation, including the switch to 100% sustainable fuel for all competitors. Beginning with the first Truck Grand Prix of the year at the Misano circuit in Italy on 21-22 May, the IVECO S-WAY LNG Pace Truck will be on duty.

The IVECO S-WAY LNG Pace Truck will be powered by bio-LNG stored in its two 540-litre tanks that hold at least 390kg of liquid bio-LNG, giving it a range of up to 1,600 kilometres. With this fuel, it will generate significantly lower nitrogen dioxide and 95 percent less CO2 emissions in comparison with a diesel truck. It has been prepared for its important role at the ETRC with a stylish, specially designed livery and several custom parts such as two yellow rotating beacons, a light bar with LED headlights, an illuminated three-piece bull bar and LED flashers required by FIA-ETRA technical regulations.

IVECO will also take part again in the ETRC 2022 as technical sponsor of the “Die Bullen von IVECO”, the partnership between the Hahn Racing and Schwabentruck teams. It will support the team with the new IVECO S-IVECO WAY-R race truck, which has undergone significant upgrades to enhance its powerful performance while cutting further its emissions.

German driver Steffi Halm will return as team leader of the Schwabentruck team, with Finnish rookie pilot Emma Makinen as team mate. Steffi aims to improve on last year’s good performance, when she won five podiums. Six-time European champion Jochen Hahn will head Team Hahn, with his son Lukas Hahn also in the team. Jochen will be competing to regain his title as Champion.

The teams’ IVECO S-WAY-R trucks will be running on bio-Diesel in all the Championship’s races.

IVECO is a brand of Iveco Group N.V. (MI: IVG). IVECO designs, manufactures and markets a wide range of light, medium and heavy commercial vehicles, off-road trucks, and vehicles for applications such as off-road missions.

The brand’s wide range of products include the Daily, a vehicle that covers the 3.3 – 7.2 ton vehicle weight segment, the Eurocargo from 6 – 19 tons and, in the heavy segment above 16 tons, the IVECO WAY range with the on-road IVECO S-WAY, the off-road IVECO T-WAY and the IVECO X-WAY for light off-road missions. In addition, the IVECO Astra brand builds off-road trucks, rigid and articulated dumpers as well as special vehicles.

IVECO employs close to 21,000 individuals globally. It manages production sites in 7 countries throughout Europe, Asia, Africa, Oceania and Latin America where it produces vehicles featuring the latest advanced technologies. 4,200 sales and service outlets in over 160 countries guarantee technical support wherever an IVECO vehicle is at work. 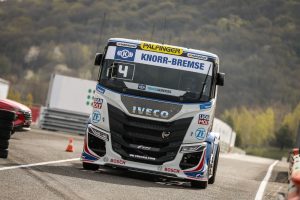