Al-Attiyah and French co-driver Mathieu Baumel won the opening two selective sections on Saturday in the latest specification Toyota Gazoo Racing Hilux and built up a lead that they were able to defend on the final stage on Sunday. The Qatari duly reached the finish in Teruel with an advantage of 3min 02sec to seal a fifth win in Spain to add to his previous victories in 2008, 2016, 2017 and 2021. This was Baumel’s fourth success with Al-Attiyah.

Al-Attiyah said: “We finish and I am quite happy to win here for the fifth time. It was a good win this year. Thanks to the organisation for making an amazing job. It was not easy to win. We work hard. The road was not easy and the level what we did here was very high. The new car, T1+, we are working very hard. This was the first time we run here in Europe. We need to test more and more now that the team has decided to do the whole championship. The next race for us is Poland, but we intend to be ready for next Dakar.”

Al-Rajhi and co-driver Bangor native Michael Orr won the final stage in their Overdrive Racing Toyota and added valuable points for second place to keep them firmly in the hunt for the FIA Bajas Drivers’ title.

The Ulsterman Orr said: “It was a nice final stage. We pushed from the start and we won the stage to keep our second position. It was a tough race with rough terrain and temperatures were very high. It was tough on the car and for the body. But everything was under control for us.”

Brazil’s Lucas Moreas teamed up with fellow countryman Kaique Bentivoglio and impressed, despite a lack of experience compared to their more experienced rivals. Moreas recorded two second fastest times on his way to the final place on the podium to complete a superb weekend with Overdrive Racing.

Moraes said: “This was my second race in the World Cup. My first was in Portugal last year. As a Brazilian, we just try to give our best every time we enter the car. It has been a pleasure to be with all these legends, Nasser and Yazeed. Day one was long and tricky, almost 400km in total. It was a clean run and we managed to pass a few drivers but the dust was not easy.” 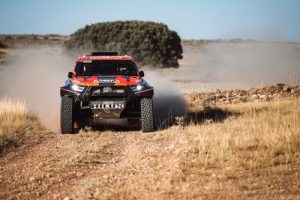 Fuel pump issues cost the Argentinean duo of Juan Cruz Yacopini and Fernando Acosta valuable time on Saturday and they dropped down to 59th overall before recovering to finish 52nd in the fifth of the Overdrive Racing-run Toyotas.

Erik van Loon returned to action in a brand new T1+ Toyota after winning the T3 category at the recent Italian Baja. The Dutchman was partnered by Frenchman Sebastien Delaunay, but lost the chance of a top position when he flooded the Hiluxes’s engine in a muddy water crossing on Saturday afternoon. Van Loon recovered to finish 54th after setting the fourth quickest time on the final stage.

Crews tackled two demanding selective sections on Saturday, with the action getting underway with a timed stage of 180.29km that was split into parts of 84.89km and 95.4km by a neutralisation zone.

Al-Rajhi led the way into the stage from Al-Attiyah but the Qatari caught the Saudi’s dust, shadowed the stage opener to the finish and snatched a lead of 1min 34.9sec with the fastest time of 2hr 28min 34.5sec. Moraes and Van Loon stopped the clocks in third and seventh, but Yacopini lost over two hours with fuel pump issues and was awarded a stage maximum time penalty.

The second stage ran for 222.13km in the intense heat of the afternoon. Al-Attiyah was again fastest and extended his lead to 5min 00.1sec. Al-Rajhi came home in third behind Moreas to maintain third overall. Yacopini was 14th but first stage issues had dropped the Argentine to 59th overall, while Van Loon slipped to 62ndafter incurring stage time penalties when water entered the Toyota’s engine at a muddy river crossing.

Al-Attiyah said: “It was a good first day for us and we are leading by five minutes and I am quite happy. Now we check the car to make sure everything is okay for the last day.”

Al-Rajhi’s co-driver Orr added: “Two long stages and it was not easy for us. We opened the road and took it careful. It was slippery in the first section and then we pushed a little more after the neutralisation. Then we had a small incident at the end: the stage was blocked by the organisers. I was sure it was the good way but Yazeed wanted to check and we went back a little bit. I said no, we must break the tape. The organisers realised they made a mistake with this – it was the same area as the Prologue from the bikes – and they gave us the 27 seconds that we lost. That was fair. We didn’t have the best rhythm in the second one, but we are still second overnight.”

The third and final selective section ran for 159.88km on Sunday morning. Al-Rajhi reduced Al-Attiyah’s overall lead to 3min 02sec with the fastest time but the Qatari had done enough to secure a fifth win in Spain since 2008.

The FIA World Cup for Cross-Country Bajas resumes in Poland at the start of September.

TweetTOYOTA GAZOO Racing’s Nasser Al-Attiyah and co-driver Mathieu Baumel will be taking on the 2022 Rally of Morocco, as part of the 2022 World Rally-Raid Championship (W2RC).  The race will take... END_OF_DOCUMENT_TOKEN_TO_BE_REPLACED