20 years of the Mitsubishi Lancer Evolution

On July 11 2000 the Mitsubishi Lancer Evolution was officially launched in the UK, with the first car to be registered being a Mitsubishi Lancer Evo VI Tommi Makinen Special Edition. Many versions and subsequent models made their way to Ireland for private use and on the rally stages.

Sold through the specialist Ralliart division, the first batch of over 250 Mitsubishi Lancer Evolution VI were specially prepared for these markets with extra corrosion protection, MPH instruments, additional security features and a myriad of extra features such as an integrated rear fog lamp and a owner’s manual. Priced from £32,995 for the Tommi Makinen Special Edition, the equivalent of around £49,000 today, all 250 sold out within weeks.

Customers were unable to buy any of the first five generations of the Mitsubishi Lancer Evolution models through official channels because they were not homologated for sale in Europe, but in 1998 legislation in the UK changed allowing small batches of vehicles to be imported under new Single Vehicle Approval rules.

With the performance car market gathering pace in the late 90s the demand for ever-faster hatchbacks and saloons, especially those with motorsport pedigree, was growing quickly. Rally enthusiasts were sourcing various and otherwise unattainable Mitsubishi performance cars from Japan through grey importers but with the new SVA rules taking effect, Mitsubishi Motors wanted Evo fans to be able to buy official vehicles with full manufacturer back-up and support.

The Mitsubishi Lancer Evolution spanned ten generations, based on four different platforms, and the first nine versions were all powered by Mitsubishi’s legendary 4G63-T four-cylinder, turbo-charged engine which was officially available in various states of tune, ranging from 260hp to 400hp. The higher-powered version were tuned in-house by Mitsubishi Motors in the Ralliart division and gained the infamous FQ moniker when the seventh generation was launched in 2001.

Every version of the Mitsubishi Evolution had a rally-inspired all-wheel drive system and by the time the first generation driveline was retired in 2008 it had evolved to incorporate, depending on the version, Active Yaw Control (AYC) on the rear differential, limited slip differentials on both front and rear axles and an Active Centre Differential (ACD). S-AWC, introduced on the Evo VII along with ACD, was further enhanced in the Evo X with added traction and stability control, as well as a six-speed dual clutch transmission, to make its incredible performance more accessible to even more people.

Due to its critical and commercial success, every subsequent iteration of the Mitsubishi Lancer Evolution was imported  thereafter, culminating in the Lancer Evolution X FQ-440 MR in 2015, of which only 40 were produced and were sold out in a matter of hours. Priced at £50,000, these were the most expensive and most powerful official Lancer Evolutions ever sold and a fitting farewell to one of the world’s most revered driving machines.

The most recognisable and desirable Mitsubishi Lancer Evolution of them all remains the VI Tommi Makinen edition which was introduced to celebrate the legendary rally driver’s fourth world rally championship title for Mitsubishi. The TME represents the finest iteration of the Evolution IV, the last Evolution to be developed by Mitsubishi’s motorsport division with a view to underpinning the WRC rally car. Mitsubishi Motors retains one of the officially-imported Tommi Makinen Editions in its heritage fleet (albeit with a replacement bonnet – the original bonnet has the rally ace’s autograph on it and was removed for preservation). 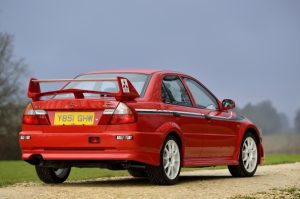 In total, 5,728 official Mitsubishi Lancer Evolutions were sold in the UK between 2000 and 2015 and its technology and spirit lives on in the DNA of Mitsubishi Motors’ current and future ranges of vehicles.